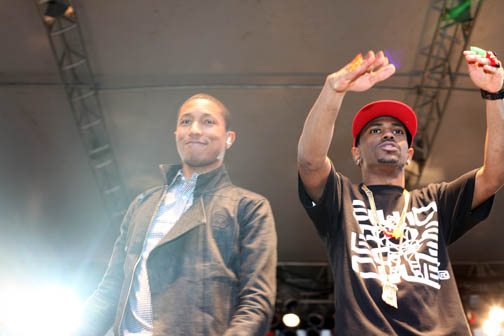 Earlier this year, Sean was named one of XXL’s Freshmen 10, and MTV News caught up with the Detroit rapper on the set of the cover shoot for the magazine’s buzzed-about issue. Sean opened up about his upcoming project (still without a release date), saying it represented more to him than just getting on. “I’m calling it Finally Famous because, basically, that’s how I live,” Sean explained. “I feel like when you’re famous for something, you’re being recognized for it. I threw that ‘finally’ in front of it just to symbolize and point out the struggle that I always had to go through.””Man, it’s unreal. I used to tell people that I used to ride to high school listening to Kanye,” Sean recalled.

“Listening to people like Pharrell, and looking up to people like L.A. Reid, so getting a chance to know them now, to work with them, to do business, that’s unbelievable. It’s like super dream come true.” The “Supa Dupa” MC’s debut will feature collaborations with most of his G.O.O.D. family, as well as Drake and The-Dream, but he was excited about a track he recorded with Pharrell called “Donald Trump.” “ ‘Donald Trump‘ is more inspirational. It’s just about, like, reaching a certain point of success. Like Pharrell is singing on the hook, ‘I’m trying to stuff it till I can’t get no more/ I’m talking Donald Trump level.’ He’s not even necessarily talking money — he’s talking knowledge and power and all of that.”