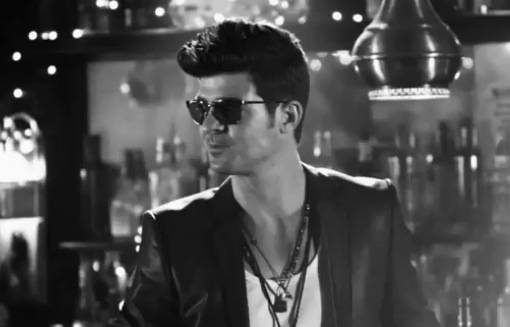 Award winning singer Robin Thicke released his smash album Love After War and is still riding high off the success of his fifth studio album. GlobalGrind caught up with Robin Thicke to ask him about love after war, married life with his wife, actress Paula Patton, working with Lil Wayne and of course, being a father to baby Julian Fuego. In the midst of chatting about music and love, the polarizing case of Trayvon Martin was brought up and Robin quickly spoke out. “I think it’s a tragedy. I feel like I’m not smart enough to have anything brand new to say, but I think it’s absolutely terrible! My prayers go out to his family.”

Given that he was born and raised in the balmy climes of Los Angeles, Robin Thicke didn’t exactly grow up dreaming of the day he would be nominated for a Juno Award. Still, the 35-year-old — who holds dual citizenship by virtue of his father, celebrated Canuck actor Alan Thicke — was tickled to find himself among the nominees for R&B/soul recording of the year at Sunday’s show. Even if he’s never really considered himself Canadian. “I was very honoured — it’s nice to be nominated in dad’s home [country],” the personable singer said when reached via telephone this week. “The nomination is just, it’s very sweet. Very kind. When you make your music, you want as many people to hear it and love it as possible. It’s nice when your peers — or a meeting of the minds — thinks you’ve made something of quality.”

Oh, and just in case you were wondering… “I definitely knew what the Junos are.” For the record, the rule of eligibility is simple: Thicke could be nominated for a Juno because he holds Canadian citizenship and he put out music during the right timeframe. “We’re Canadian — we like to be more inclusive,” joked Melanie Berry, president of the Canadian Academy Of Recording Arts & Sciences, which puts on the Junos. Still, the inclusion of a well-known American crooner did raise some eyebrows. Toronto’s Melanie Fiona, who is nominated alongside Thicke for R&B/soul recording, admitted she was surprised to see his name among the nominees, even though the two singers are friends. “I was like, ‘I didn’t realize Americans are getting nominated at the Junos,”‘ the two-time Grammy-winning Fiona said during a recent interview.

“I spent a lot of time in Canada,” said Thicke, who’s married to Mission: Impossible — Ghost Protocol star Paula Patton. And unlike some prominent homegrown nominees, Thicke actually plans to attend the show in Ottawa this Sunday. “Just for fun, [I’ll] come hang out,” said Thicke, who’s nominated for his Lil Wayne collaboration Pretty Lil’ Heart. “I never turn down a good party.” Still, even with his Canuck credentials, the surprising nomination mainly made Thicke think of his father. “My dad has total Canadian pride. My dad is … a lover of all things Canadian.” The elder Thicke even co-hosted the Junos with Burton Cummings way back in 1983. Like many Juno-related matters, Robin Thicke was gleefully unaware of that piece of trivia. “No he didn’t!” he said with palpable surprise, laughing. “I love it. I didn’t even know that. See? That’s my point. You can’t do anything in Canada without my dad having been a part of it.”