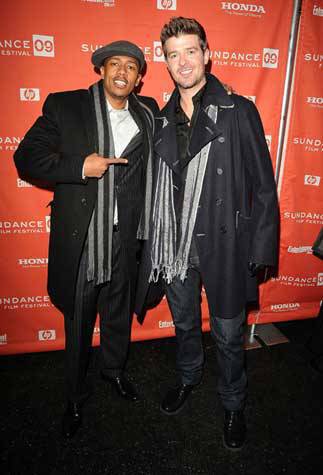 Musician Robin Thicke and comedian/actor Nick Cannon are teaming up to shoot a new U.S. reality TV series about their lives as the husbands of big stars. Thicke, who is married to Mission: Impossible – Ghost Protocol beauty Paula Patton, and Cannon, whose wife is Mariah Carey, are set to lead the cast of The Real Husbands of Hollywood on network Bet next year (13). The programme will also include actor Duane Martin, who is married to My Wife and Kids star Tisha Campbell-Martin, and it will feature appearances by rapper Nelly, actors Faizon Love and Anthony Anderson and comedians Kevin Hart and J.B. Smoove. The project is billed as a “semi-scripted, reality TV-spoof of every fill-in-the-blank Wives franchise”, such as The Real Housewives of Beverly Hills, which featured actor Kelsey Grammer’s ex-wife Camille.