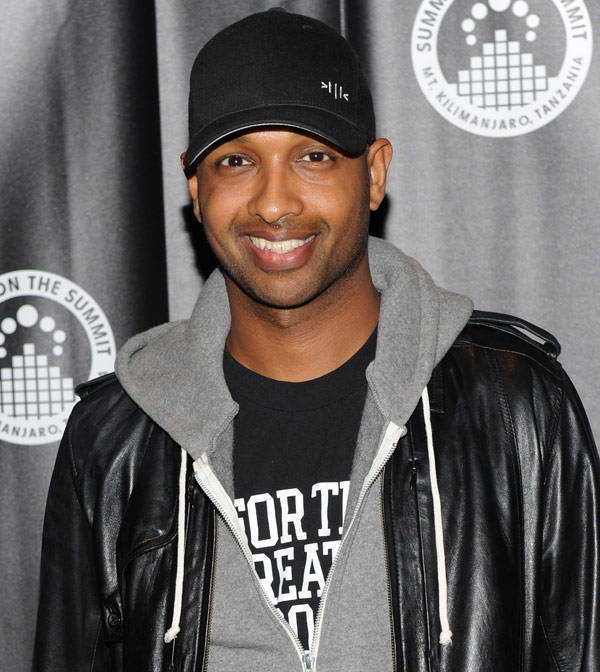 So, I am trying to reach Bono. If anyone can hook that up, let me know! As you read this, I am on Mt. Kilimanjaro with friends, allies and educators to bring awareness to the global clean water crisis. Climbing a mountain can be a difficult feat; organizing and rallying millions behind you is even more elusive and challenging, but so is walking miles, everyday, in search of water, hoping it won’t kill you.

Right now, more than anything, I could use some help reaching Bono — figuratively and literally. I am a massive fan of his musical work, but his level of activism and effectiveness is what I aspire to achieve in my pursuit to raise awareness about the global clean water crisis and in life.

The fight for clean water was my life’s work even before I knew it. My father was born in Ethiopia and when both he and my uncle were wracked with waterborne disease, it was my father that survived. My uncle did not. More than 3.4 million people die every year from a water-related disease, something that is completely preventable, but in the public conscience the issue seems to go unnoticed.

This year’s climb hopes to focus on how water relates to issues around women’s empowerment. The lack of clean water is worse for women. Oftentimes women must travel farther and farther in search for water, and many are forced to go outside of secure areas, which puts them in grave danger of being attacked or becoming enslaved. Women, who spend most of their time searching for water, lose out on receiving an education, which includes, but isn’t limited to, learning about HIV. Moreover, if women contract HIV, they will be treated (if they are lucky) with antiviral medication washed down with a tall glass of diseased water, contaminating their already compromised immune systems. The problems associated with the lack of clean water are broad and far-reaching, affecting issues ranging from sex slavery and education to security and HIV.

In a TED talk, Bono stated that HIV is “not a cause, but an emergency.” The lack of clean water affects over 1 billion people — something that is completely preventable. Our global water issue is not a cause, it is a human rights emergency!

We all want to be as effective as Bono, but bringing about that level of change and commitment is a mountain on its own. It is not easy to make a difference, but then again it is not easy walking miles to find water, hoping it won’t kill you. So what would Bono do? Maybe his answer would be to fight for that level of change because you have to. For me, it’s because I have to.

In 2010, we climbed Mt. Kilimanjaro for the first time and today we will be embarking on our second journey to the top of Kili. In the process of organizing the second climb I was met with so many roadblocks and setbacks. Whether it’s bureaucratic red tape, a lack of interest from people or the literal bombardment of information in the world that keeps people from hearing you scream from mountaintops, there is always something to hold you back.

The first climb was great with Jessica Biel, Lupe Fiasco, Santigold, Emile Hirsch, Elizabeth Gore and Isabel Lucas, along with brands that are supporting us again on the second climb — P&G, HP, Intel, KLM and Eddie Bauer. And it’s their support in helping to raise awareness and inspire action that will bolster the efforts of Water.org, an organization we’ve teamed up with that works tirelessly to find solutions to the global clean water crisis. We are grateful to have such innovative partners and thankful that their teams see value in doing good in the world and seeking new and meaningful ways to engage. Here is a clip of the first climb and what we were able to do:

During the creation of Summit II, I reached a point where I was disheartened and wanted to give up. I was tired and had really exhausted my social currency trying to rally the troops. How would Bono have done it? A few weeks ago, I was asked to do a presentation about Summit on the Summit at Westridge Girls Middle School in Southern California. I have to say, those students are some of the smartest and coolest young women I have ever met. After the presentation, a student asked me how she could be more effective with her “Stop Bullying” campaign. I was reminded that success is relative, and that I was to her what Bono is to me. I was reminded that we are doing our best with the resources we have to make a difference.

Yes, organizing this second climb has been challenging, but people keep showing up to make it great. The climbers this year have rallied to support (Mark Foster – Foster The People, Justin Chatwin, Beau Garrett, Chevanee Reavis – Water.org) and the social team (Justin Timberlake, Santigold, Dianna Agron, Olivia Wilde and more) attached to it have been gracious to broadcast SUMMIT’s efforts on our behalf. Will it be judged for its impact? Even with the loyal support of our partners, it still went through many struggles, plagued with financial issues and an inability to pull together the elements that made the first climb so powerful. But what would Bono do? Pull back and fight another day? Or push forward knowing you can still make a difference. Emerson once said that “to know even ONE life has breathed easier because you have lived. That is to have succeeded.”

Big or small, this second climb will be successful, but mainly because of people like you reading this, who will support us by checking out the summitonthesummit.com site and helping to share our story with the world. This is a message that needs to be heard. And, now more than ever, technology can help the word be spread more rapidly and effectively than any other time in human history.

In the ’60s, Milgram tested the real bounds of the six degrees of separation. He found what we all know in our hearts to be true — the world is interconnected and smaller than we think. In fact, we all have one specific thing in common. We are all 72.8 percent water. So, the question I have to ask you, before you close this link, is who can you send this message on to that might be able to help us all get one step closer to Bono?

If I were to speak to Bono it would be to humbly ask for his advice, and his alliance so that I may better serve the world. My hope is to be a part of carrying the torch of service he has carried so faithfully, farther. Consider this my hand outstretched and an application for the job.