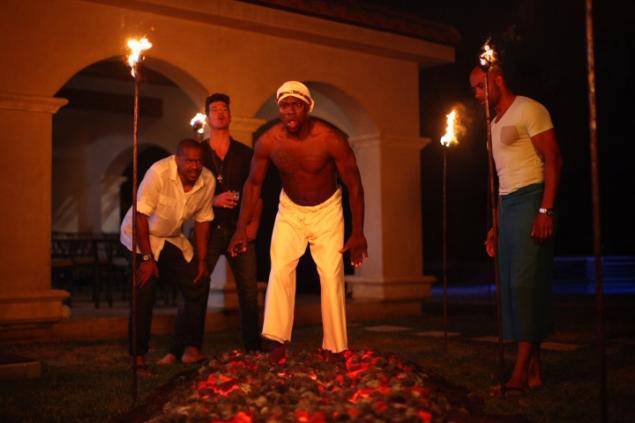 Kevin Hart has gathered several of his fellow men, all taller than he is, to join him in a new weekly BET comedy-improv series called “Real Husbands of Hollywood,” starting Tuesday at 10 p.m. They include Boris Kodjoe, Duane Martin, J.B. Smoove, Nelly, Nick Cannon and Robin Thicke, who fills the part usually reserved for black actors, the “friend” whose most obvious role is creating visual diversity. Hart says he’s just grateful they could all join him. “Boris, who’s known to be an attractive man, you know, we feel like his time is past,” says Hart. “Nobody thinks you’re attractive anymore, Boris. Nelly being a rapper, but he’s into weights. You know, stop lifting. It’s too much.

“J.B. speaking, he spits a lot. Let’s talk about it. And Robin being with Paula Patton, we feel like it’s not fair because Paula Patton should be with one of us.” This is the sort of supportive patter, Hart says, that will help “Real Husbands” meet the biggest challenge for any TV show this season: to satirize the “Real Housewives” franchise by having a half-dozen men be more absurd and outrageous than the women on those shows. Hart says the cast is key. “The personnel become our situation,” he says. “We’re making fun of ourselves. All the things we talk about are self-inflicted.”

For instance, he said, Cannon joined the show in part “to incorporate things people have said about him and Mariah [Carey, his wife]. He said, you know what, if people are saying it, why not make fun of it and make it even crazier than it already is to him.” “Funny is funny,” says Smoove. “Men are going to be men — white men, black men, Indian men — we all do the same stupid stuff over and over again, and that’s why it’s called ‘Real Husbands.’ ”