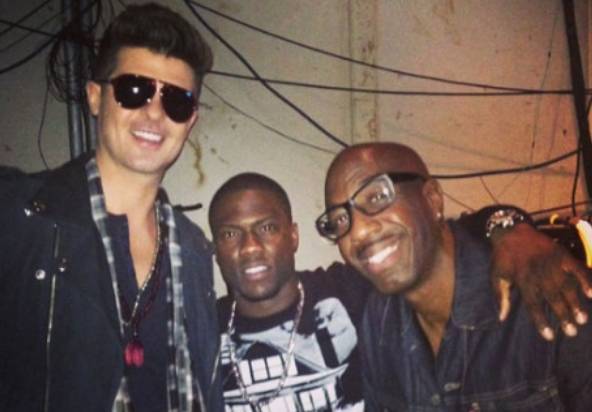 Robin reveals how his impression of Kevin Hart landed him a spot on “The Real Husbands of Hollywood” Robin Thicke had no clue he was auditioning for “The Real Husbands of Hollywood” when he first met Kevin Hart. The “Lost Without You” singer headed over to the Bravo Clubhouse for “Watch What Happens Live” earlier this week. Although he could have talked about his amazing music and his lovely wife, Paula Patton, host Andy Cohen wanted to know how much of “RHH” is actually scripted. “I would say most of it—75 percent is improvised,” Robin revealed. “We have a script and sometimes you have to just say one line to keep the story moving.”

He added, “When Kevin shows up on set and we all sit down and we all start rehearsing the scene, the script goes right out the window.” Of all the guys on the show, Robin is closet to Kevin, whom he’d met at NBA player Chris Paul’s wedding. Little did Robin know that their first interaction would be all Kevin needed to convince him that the singer should be part of “RHH.” While many couldn’t really explain Robin’s casting (he’s the only one on the show that doesn’t have a background in comedy or acting), the crooner impressed Kevin. “I started doing my Kevin Hart impression for Kevin when I first met him because I am big Kevin Hart fan,”

Robin explained. “He started laughing. Then a month later he called me and was like, ‘I’m going to do this show, and let’s have dinner.'” Their chat over dinner turned out to provide some prime material for Kevin’s show, too! “The dinner that we had at the Chateau Marmont ended up being the first episode—the first two episodes,” Robin revealed. “What was so funny is that a lot of people kept coming up and saying hi to me, and none of them recognized Kevin.”