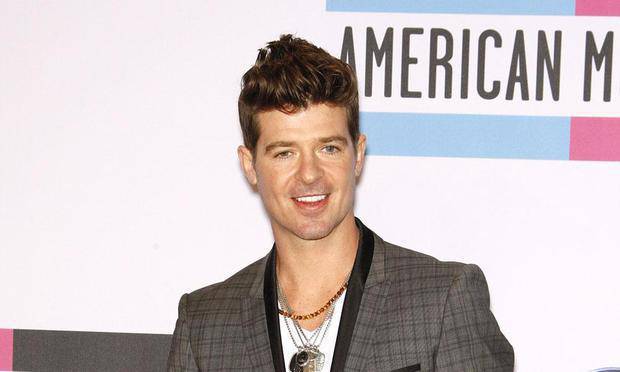 Robin Thicke accidently had sex to his own song. The ‘Blurred Lines‘ hitmaker – who married his long time girlfriend Paula Patton in 2005 – has got intimate to his own music, but only when her playlist has skipped to one of his tracks. He said: ”I have [had sex to my own songs.] I don’t like to do that, but … My songs are about love and it turns into sex. It happens accidentally. People have playlists so my wife will have a playlist and all of a sudden it’ll turn into my song.”

The singer-songwriter’s controversial video for ‘Blurred Lines‘ – which features a number of naked girls and is banned from internet site YouTube – has recently come under fire for objectifying women, but he insists all the girls in the music video were very comfortable with being nude and were paid a large sum for it.

He added to French radio show C’Cauet: ”It was actually the director who found the [girls]. Have you heard of a magazine called Treats? She [Emily Ratajkowski, the main girl in the video] has been featured on the cover. Most of the mag is nude so she is very comfortable with her clothes off. ”They did feel comfortable because they had done a lot nude modelling before, they’re not dancers they’re models. The idea was for the girls to be naked and unimpressed and us guys were supposed to be the fools. They got paid very well.”