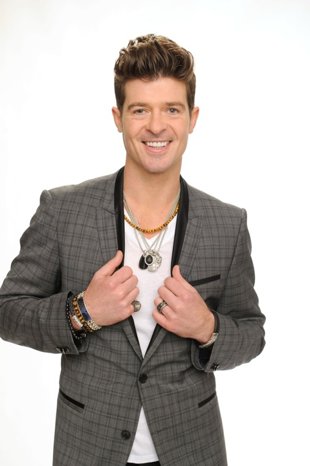 Robin Thicke has hit back at critics who called his hit song “Blurred Lines” (and its corresponding music video) as misogynistic. “I can’t even dignify that with a response, that’s ridiculous,” Thicke told BBC’s Radio 1. He did, of course, dignify that with a response. Here it is: “I don’t want to be sleazy, I’m a gentleman, I’ve been in love with the same woman since I’ve been a teenager. I don’t want to do anything inappropriate.”

Thicke says that his wife, actress Paula Patton, actually pushed him to release the NSFW version of the video that was pulled from and re-added to YouTube. “My initial response was I love the clothed version, I don’t think we should put out the naked version,” he said. “And then I showed it to my wife and all of her girlfriends and they said, ‘You have to put this out, this is so sexy and so cool.'”

In the clip, Thicke, Pharrell Williams and T.I. cavort with naked models, flipping their hair and generally dancing around them. Some critics dubbed the video and song “rapey,” pointing to lines like “I know you want it” and the video as “blurring” the lines of consent and agency. Not so, says Thicke. “For me it’s about blurring the lines between men and women and how much we’re the same,” he said. “And the other side which is the blurred lines between a good girl and a bad girl, and even very good girls all have little bad sides to them.”

That doesn’t totally jibe with Thicke’s earlier comments. In an interview with GQ, the crooner was a bit more glib: We tried to do everything that was taboo. Bestiality, drug injections, and everything that is completely derogatory towards women. Because all three of us are happily married with children, we were like, “We’re the perfect guys to make fun of this.”

People say, “Hey, do you think this is degrading to women?” I’m like, “Of course it is. What a pleasure it is to degrade a woman. I’ve never gotten to do that before. I’ve always respected women.” So we just wanted to turn it over on its head and make people go, “Women and their bodies are beautiful. Men are always gonna want to follow them around.” The criticism certainly hasn’t harmed the song’s performance, as it continues to dominate the pop charts in the United States and the United Kingdom.