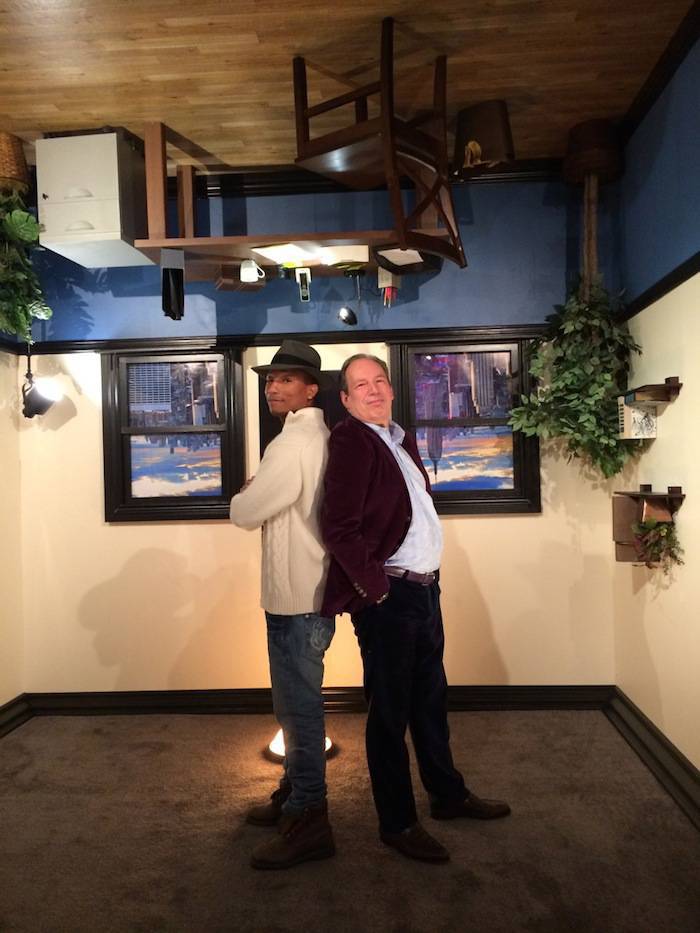 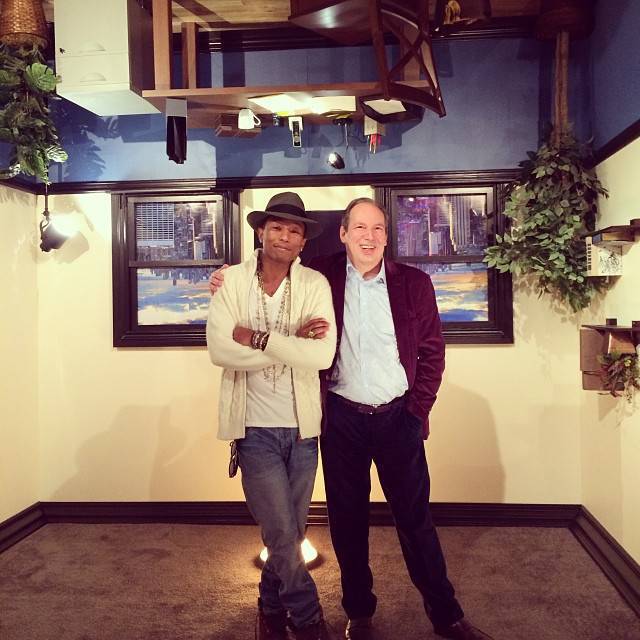 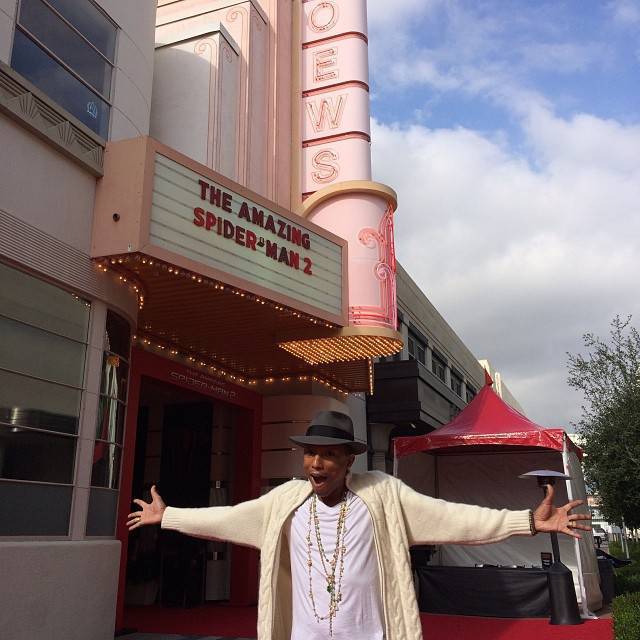 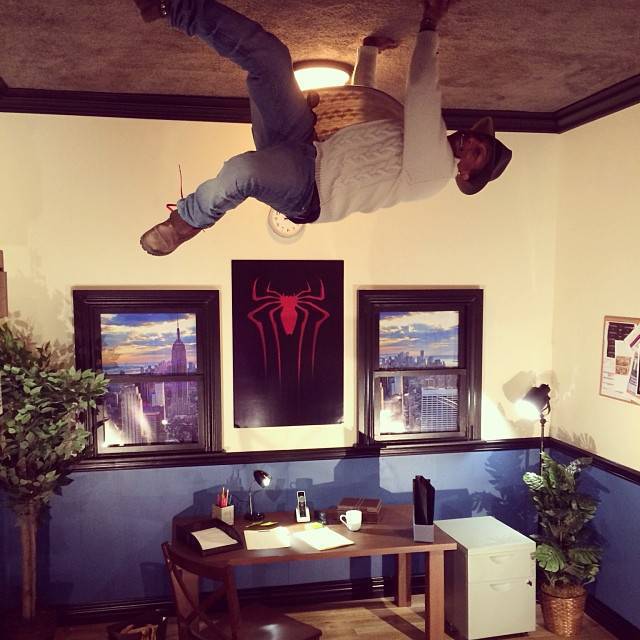 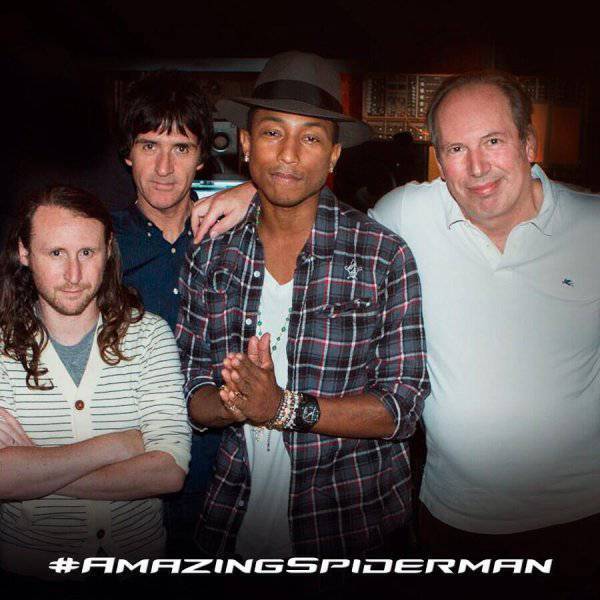 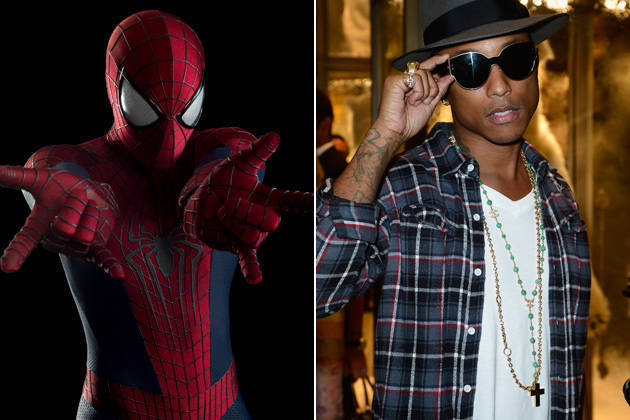 Pharrell Williams is on a serious winning streak. He is about to score the new Spider-man sequel with Hans Zimmer. There were some evidence off the new Hans Zimmer x Pharrell collaboration to be found in the latest Sean O’Connell’s interview with Amazing Spider-Man 2 director Marc Webb at this year’s San Diego Comic-Con. During their conversation the subject of Zimmer came up, and not only did the filmmaker confirm that the composer is handling the score of the sequel, he added, “He may have another collaborator, but it’s too early to discuss that.” Based on that quote, it almost sounds like Zimmer and Williams will have equal hand in writing the music.

Pharrell Williams likes to spread the wealth and the credit. As a music producer and all-around tastemaker, he’s played key roles on two of the year’s biggest songs (Robin Thicke’s “Blurred Lines” and Daft Punk’s “Get Lucky,” duh). BBC Black, his collaborative clothing line with renowned menswear designer Mark McNairy, is making waves in the fashion industry. And he’s the host of ARTST TLK, a YouTube interview series that finds him in the role of expert journalist, mining intriguing answers from fellow artists like Spike Lee and KAWS. Basically, sharing is Pharrell’s thing.

“Hans Zimmer is like the king of all kings. I carry his books, sharpen his pencils, get his coffee, and I listen to every punctuation that comes out of his mouth. He is a genius,” tweeted Pharrell about their collaboration. ‘The Amazing Spider-Man 2′ stars Andrew Garfield, Emma Stone, Jamie Foxx, Paul Giamatti and Dane DeHaan, and swings into theaters May 2, 2014.

Pharrell’s latest pairing is with global net-based marketplace eBay. Pharrell’s one of several curators (including Solange Knowles) for their Follow It. Find It. campaign, where he culls the site for “items I had no idea you could find on eBay.” His picks vary from a Chanel scarf to a French horn and Disney pins. He shares them all with incoming followers on the site. Billboard sat down with Williams at this week’s launch in New York City to talk about his eBay page, upcoming work with Beyonce (like why her fifth solo album is taking so long to come out), and how happiness has inspired his musical output this year.

Billboard: Talk about your role with Follow It. Find It.
Pharrell Williams: At the moment, I have a collection. I just got the opportunity to check it out and see what it’s about. Fear of missing out is a marketing tool. And it doesn’t have the gravitas that we’ve been convinced it has, because, essentially, you can find whatever you’re looking for on eBay. I’ve learned that eBay isn’t the place I thought it was. I thought it was a glorified yard sale. It’s not. It’s a place that is meant for convenience and where people can actually convene

When I go into Chanel, it’s mainly just women’s things. And Celine only makes women’s things, but I find what the fuck I can wear because I love it so much. But Chanel’s resort collection, every once in awhile, has a few men’s pieces that usually aren’t in stores. And you want the unisex stuff, like an iPod case or some necklaces that I’ll have remade. But that’d be it. [Laughs] One of the biggest things I’d get pissed off about is all the shit that they use to dress the windows with, like the surfboard or the basketball. You couldn’t buy them because they weren’t for sale. But a year or two later, you might find them on eBay. Like, come on now. As much as I like Commes des Garcon, now I know where I can find it when I couldn’t before.

On your ARTST TLK show, you talk with an array of creatives. What’s it like being the question-asker and not the asked?
Thank you for bringing up ARTST TLK. I’m always thankful when people recognize that effort of ours. It’s really just for me. It’s a crash course in these people’s life and how they operate. So I get to ask a Jeff Koons what his motivation is. And the answer’s for me.

You do ask a lot of enthusiast questions that show you’re a real fan of the subjects.
Well, I do have a crazy comprehensive team, too. My team is second to none. A lot of the questions, they help me put together. Because the only thing I’ll sit there and do the entire time with every artist that I love and respect—which is all of them—is ask how they tap in and ask where they get their inspiration from. I just want to talk about the gift and will that God has given us. Or the universe. Whatever you want to call it. And our ability to tap into the ether. I’ll spend my time doing that. But I have a team that knows there are a lot of people watching. And they’re going to want to know other things that the layman would want to know. And that’s another thing, too: I’m a fan. Being an artist, I’m going to keep asking the weirdo questions like how are you zoning out? What gets you there?

Joy seems to be the feeling you’re trying to infuse into your music this year. Is that an accurate idea? Everything you’ve assisted on or produced just feels good.
The impetus for all of my music texture-wise is “What is missing?” I don’t want to do shit that sounds like other people and what’s going on. Joy is something that the world needs more of right now. And it’s funny, because I almost tweeted that word the other day, “Joy.” But it was brought to my attention that there’s a much better word that was fitting for a couple of things. They’re the same thing, but it also serves a great, incredible purpose, which is that this video for “Happy” is coming. So I ended up tweeting the word “Happy.” People are forgetting that it’s the simplest things in the world that can make you smile. So “Happy” and “Get Lucky” and “Blurred Lines,” when you listen to the music, chord-wise, it’s just [sits up and pumps up chest] uplifting. Until we get enough of that, that will be the page that I’m on. I don’t want to make anything sad.

You’re very humble, but with the kind of multi-platinum success you’ve had so often, do you ever know when you’ve got a big record on your hands during the creative process?
Nope. Everything in this life is numbers and cause and effect. The music is the cause. But the effect is not guaranteed. There’s been a lot of songs where I think, “Man, I don’t know why this never blew up!” There are a lot of factors that need to kick in. and the biggest one is the people. So if they don’t vote for the song, purchase the song, stream the song, then there’s no “Big.” So when you say “Big,” “Big” is the effect. That’s never ever guaranteed.
What does build confidence is the reminder that if you continue to be loyal to your creativity, your creativity will always have a home. Whether that’s in a big house of success or you’re just looking at yourself in the mirror knowing that it’s true to you. This year the people have been extremely good to us. It’s like a confirmation of “Yes, we believe in you.”

Who else are you producing for that we can look out for in the months to come?
Ed Sheeran. Usher. I’m going back in with T.I. Beyonce. Jennifer Hudson. Nelly has this really big record named “Rick James.” That’s my jam. Hans Zimmer and I are scoring “The Amazing Spiderman 2.” The “Happy” video, it just feels like people—good people that all remember that we are entitled to smile. I’m very excited about that.

How’s the Beyonce work coming along? She’s been crafting this album for a while.
B’s album is crazy. Let me tell you what it is. She’s very particular. She’s a Virgo. And she’s not going to put it out until it’s ready and feels like it’s right to her. She’s got a very specific taste. I guess that’s the reason she’s Beyonce. Her name is recognizable around the globe and that’s huge. That comes from someone that has very particular taste. When you know what you want, you won’t stop until you get it. [Other people are hearing her album] and are like “Whoa!” And she’s like, “Yeah, I’m almost done.” And she’s the queen.

So we can wait.
That’s exactly right. We will wait.