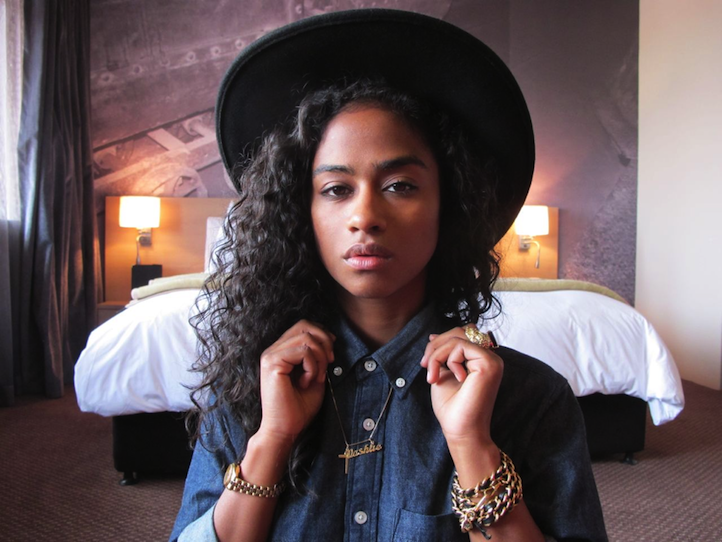 There’s really no need for an introduction to Va$htie Kola. The video director, designer and all around fly girl has been a staple in New York’s downtown scene for years now. She’s lent her creative services and vision to the likes of Def Jam Records, Jordan Brand and Colette and throws parties that are the stuff of legend. By keeping her finger on the pulse of what’s bubbling in the worlds of both music and fashion, it comes as no surprise that Pharrell called on her expertise to help bring his vision for IceCream Girl to life by naming her its Creative Director. Here, Va$htie talks with Life+Times about IceCream Girl, style and her influences.

Life+Times: What are some of your responsibilities as Creative Director for IceCream Girl?
Va$htie: My duties as Creative Director includes concepting the entire collection for the season, coming up with the theme, the reference, designing, figuring out how the product may or may not be marketed and identifying which stores the collection should be involved with. It’s a range of duties. As far as my daily duties, they sort of change day by day, but I spend a lot of my time with my designer. She and I work together and basically come up with ideas, concept and design while always keeping the consumer in mind and understanding who our customer is.

L+T: What was it about Icecream Girl that made you feel like you had to be a part of it?
Va$htie: Definitely the heritage of the brand and knowing what Billionaire Boys Club and Icecream have done in the world of fashion. In my mind it’s definitely one of the first brands of its kind that bridged street-culture with skateboarding with music with both high fashion and low fashion. Knowing that heritage and what came out of it was interesting to me. I kind of felt connected to it also. I’ve always felt connected to them as a creative entity that represents a lot of the things I represent. They understood my vision, which I’m very grateful for. They allowed me to do what I see fit for the brand. They’ve given me a lot of creative freedom and they’ve entrusted me with the brand, which means a lot to me. It was a no-brainer when they approached me with the project. It all made sense, and in a way it wasn’t me necessarily doing insane work or me trying to connect the dots. It was all already there. I’m basically designing a collection that I would wear.

L+T: Who is the IceCream girl?
Va$htie: The IceCream girl to me is me [laughs]. It’s very easy to design for a brand that kind of matches my own lifestyle and my own interests. When I came up with the concept for the collection it was sort of just modeled after a girl like myself. She’s kind of a tomboy at heart, she’s very interested in being comfortable first and foremost, she obviously has an intricate style, but wants to do it her own way. It’s a girl who is in control of her own life and in control of her own destiny. She’s like the cool girl who everyone wants to be, but she’s also the cool girl that’s aspirational and inspirational and everyone is friends with because she’s that down to earth. So yeah, that’s basically the girl and there are tons of girls like that around the world.

L+T: What influences your style?
Va$htie: My style is always influenced by comfort, because I’m constantly on the go. I live in New York City and I can’t run down the street to catch a cab in heels. My whole life is geared towards being on the go and comfort. I need to be dressed for that and that means being dressed for my own personal success. It’s being influenced by my lifestyle, but it’s also influenced by all of my interests in life like trends that are sort of underground. All of those things play into my style. I like to draw a lot from the ’90s and the women of that era. It’s always a range of inspirations, but I find a lot of fun inspiration there.

L+T: One of your many talents is knowing what’s “cool.” Was it always like that for you? Growing up, were you normally on top of what was cool?
Va$htie: Well, thank you. I’d like to think that it’s always been that way. I owe a lot of it to having older siblings who put me on to some interesting things that were happening in their age group. That made me want to know what was happening outside of what was on MTV or what was on the radio, so I guess I always had a desire for things that were “cool.” I’m not sure how else to call it. It kind of sounds a little pretentious to call it “cool” [laughs]. I just feel like there’s a lot of interesting things and movements happening and I like to be aware of that and I like to always be involved in that somehow.

L+T: Your background in directing videos, designing, throwing parties and all of the other cool stuff you’re involved with always has you in the midst of what’s happening as it’s happening. As it relates to fashion, do you think that gives you an advantage in knowing what’s cool or what styles people will respond to?
Va$htie: Oh, absolutely. You were saying that I’m kind of known for knowing cool things, but being surrounded by other people who know those things puts me on to a lot. I’m constantly finding out new information, being put on to new artists and sort of being on the cusp, because I’m involved in so many great things. I think living in New York City – which in my opinion is the best city ever on Earth – also plays a part. I feel like people in New York are constantly in the know or ahead of the game, because so much of what is happening is happening in New York. I live in the mix of it all. I don’t separate my personal life and my lifestyle. All of it kind of revolves around being in New York City and on the streets and just being in the mix.

L+T: For so long you’ve worn many hats. If you were forced to choose only one of your many roles which one would it be?
Va$htie: That’s so hard, but I think I would have to say creative directing, because it could still allow me to do work with videos and everything else that I’m doing. It’s sort of a different realm for me and it’s a different process, because it’s different every time. It’s just a new career path in my life where I’m allowed to do everything that I want and everything that I see fit for a certain company or brand. I’m able to fulfill a lot of my creative dreams by uplifting another entity, which is really cool. It’s something where I’m learning something new every single day, which is an amazing opportunity. I still love everything I do, but if I had to pick one I would pick creative directing.

L+T: What does style mean to you?
Va$htie: Style means expressing yourself. I find that my style has always been representative of who I am. It’s been pretty congruent for a long time. I like wearing the same things all the time, but it always represents me. It also may say something about where I am at that point on my life. I feel like style should always represent who you are. I feel like a lot of styles are kind of boring to me, because a lot of people just copy what they see on Tumblr or Instagram. They just sort of copy and copy and copy. I really wish people kind of did their own thing. Even if you love someone else’s style, try to put your own spin on it. No one else can be you, so with style you should always represent yourself. Style isn’t the label or how much money you put into your clothes. It’s just about how you wear it and what it says about you.