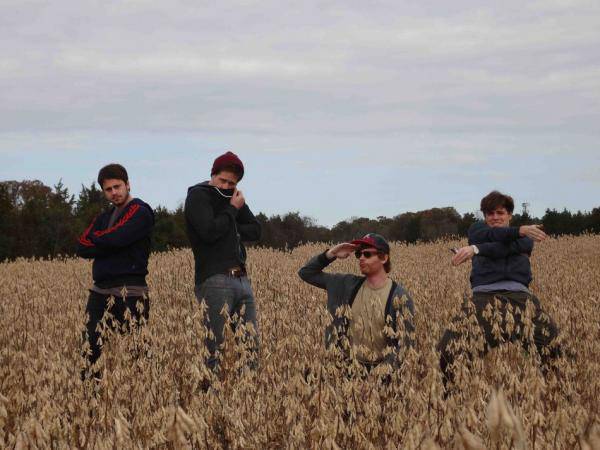 Mansions On The Moon are one of my favorite groups out right now and have been for the past few years since they broke onto the music scene. Check out what the guys had to say about music, touring, motivation in making songs and more.

Tony Stark: First and foremost, please introduce yourselves for those who may not have known who you guys are.
Mansions On The Moon:
Ted Wender – Singer, Guitar
Jeff Macorra – Bass
Ben Hazelgrove – Keys
Lane Shaw – Drums

TS: How did you guys first meet each other and how did you come up with the fantastic name of Mansions on the Moon?
MOTM: Ben and Ted met when they were kids up in northern Michigan. I (Lane) met Ben shortly after high school, then we started our first band, Pnuma Trio. Many years later, after the founding of MOTM, we found Jeff via Craigslist. He joined us for a tour, then after we realized he was more then just a rowdy bass player, he was officially invited into the club. As for the name, one night we had a party at a beach house in VA beach. Ted and I stepped off to the deck at some point for a smoke and were pondering about a name. We looked up at the moon that moment and begin thinking of cool things to associate with that image. “Man on the Moon” came first and then we knew we couldn’t use that so Ted thought a cool visual would be having a Mansions on the Moon. It’s also kind of a metaphor for us making it in the music industry.

TS: Do you think one day we will have people living on the moon and would you want to stay there if you could?
MOTM: Yes. And maybe…haha. As long as our friends could live there too.

TS: With roots in Virginia, how did the connection with Pharrell, Shae and Chad come about and how has the N*E*R*D/ Neptunes influenced you?
MOTM: That whole connection came about due to Ben and Ted’s stints in Virginia. For about a year they were working in and out of Atlanta and Virginia Beach. With the help of friends like Illusive Media (“She Makes Me Feel” video), the music naturally circulated around to The Neptunes crew and they liked it. I think we all respect and admire those guys for their musical abilities as a whole. They can crossover into a lot of genres with ease, and we liken ourselves to that same passion and direction.

TS: Paradise Falls was really the introduction for me to your music and I’ve been hooked ever since. Who are some artist that you listen to a lot as of late?
MOTM: Oh man… Kaytranada, Tame Impala, Toro Y Moi, Bag Raiders, Angus Stone, Kendrick Lamar, Curren$y, Bombay Bicycle Club… the list will go on forever.

TS: I like to describe your music to others as futuristic, space age, Crosby, Stills & Nash by the way the harmonizing blends so well. How would you describe your sound?
MOTM: A musical weed brownie.

TS: What is the main motivator to get the creative juices flowing when crafting new songs in the studio?
MOTM: Beer, weed, chips and queso, daiquiris, chai tea, coffee.

TS: If you could collaborate with any artist dead or alive, who would it be and why?
MOTM: Michael McDonald. He has a voice made of silk. Ladies love silk.

TS: What has been some of your favorite places to perform and can you recall any strange tour encounters you’d like to share?
MOTM: I think our first show at Mercury Lounge that sold out. That came out of nowhere and we had a great time. As for the strange tour encounters… we’ve seen a tiger at a gas station in the middle of Louisiana. That was badass and sad.

TS: With the Light Year EP coming out last year and Full Moon EP being recently released a few months ago, can we look forward to more touring and eventually a full length studio album for 2014?
MOTM: We are in the process of planning the year out now. We really want to be on the road supporting this new EP and the new songs that we will release at the top of the year. We have some pretty awesome music that we can’t wait to put out with some fun videos and hit the road right after. Expect us to get moving on the road in the Spring time.

TS: Thank you for taking the time out of your schedule to do this interview, anything else you like to add or say?
MOTM: Of course! Thank you for being interested and supporting our project. We look forward to seeing you on the road and having a hell of time 🙂