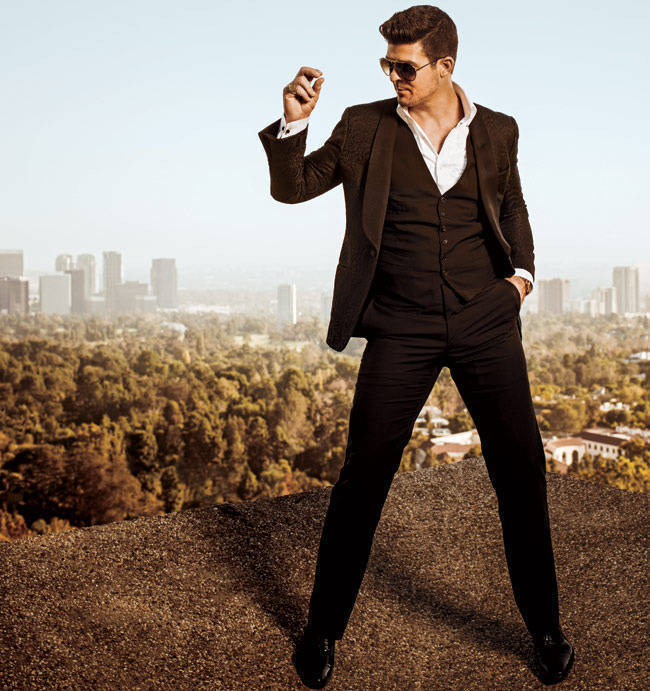 By David Hochman. Let us not kid ourselves—Los Angeles looks way better from the top of the mountain. Robin Thicke is standing alone on a corner perch inside the concrete and steel dream space above Bel-Air known as the Sheats-Goldstein Residence. It’s one of those 1960s John Lautner–designed aeries where glass walls slide open to dizzying panoramas at the touch of a button. With a good running leap, Thicke, here for our photo shoot, could probably cannonball into a swimming pool down off Sunset if he so desired. Instead, he’s just taking it all in: the view, the moment, the giddy insanity of the world at his feet.

A year ago—say around the time of the last Grammys—Thicke, who’s 36, was just another blue-eyed R&B crooner, almost famous for the songs he wrote for others (Michael Jackson, Usher, Christina Aguilera) and for being Growing Pains star Alan Thicke’s equally dashing son. Then the madness happened. Last spring, with an assist from collaborators and guest vocalists Pharrell and T.I., Thicke released a song called “Blurred Lines” on an album of the same name. The single took roughly one hour to write but contained hooks so playfully seductive—“Hey, hey, hey/What rhymes with hug me?”—that the planet had no choice but to dance along. 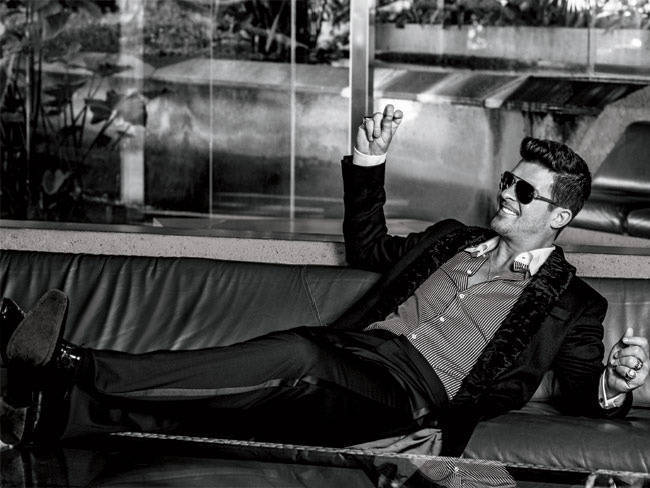 “Blurred Lines” hit number one in more than 100 countries, including the US, where it was helped along by a live performance by Thicke and Pharrell on The Voice. The real kick came from the video, featuring European supermodel Emily Ratajkowski wearing nearly nothing (in the safe-for-work version) and actually nothing (in the unrated one—which also had balloon letters that spelled out “Robin Thicke has a big dick”). If you think the song got more radio play than any in music history, you’re correct. It set a one-week record with 228.9 million radio impressions. And now he’s standing tall with three Grammy nominations.

Yet, somehow, this was only the beginning. The “Song of the Summer” became the controversy of the year after critics blasted its content—particularly the refrain “you know you want it”—as misogynist, even “rape-y.” The biggest outcry came after the MTV Video Music Awards when Miley Cyrus twerked Thicke’s crotch. At this point, if you don’t know what twerk means, we can’t explain it. Suffice it to say, the moment became the most tweeted about event in Twitter history, surpassing even the reelection of President Obama.

Robin Alan Thicke was born in Los Angeles on March 10, 1977. His mother is the actress Gloria Loring, who appeared on Days of Our Lives and had a 1980s hit record called “Friends & Lovers” with Carl Anderson. Alan Thicke was the quintessential sitcom dad as psychiatrist Jason Seaver on Growing Pains. Loring and Thicke divorced, and young Robin hung out in Dad’s bachelor pads—he now lives in one he bought with his actress wife, Paula Patton, whom he’s known since high school, and their 3-year-old, Julian—and smoked a lot of pot. 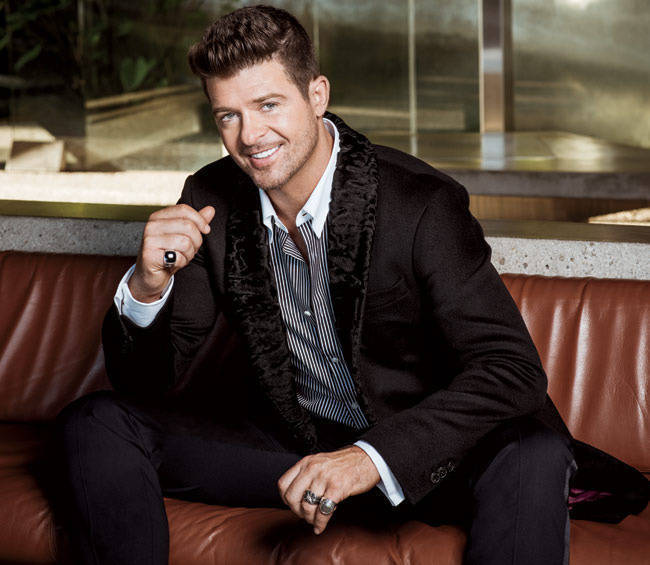 Thicke also made music. Signed as a teenager to Interscope Records, he wrote songs for artists like Brandy and Brian McKnight, and released five albums, several of which were supposed to make Thicke, who went by one name for a while, the next big thing. They didn’t. Even when a sexy ballad, “Lost Without U,” spent a couple of weeks atop the R&B charts in 2007, things sort of fizzled afterward. All of which made this year’s ride to cray-cray stardom that much sweeter. Finishing off a cigarette (“I know, I know,” he says), the singer-songwriter, in black rockstar jeans and a leather jacket, sits down for what turns out to be a rollicking, candid conversation. Even as he looks back on the madness of the last few months, Thicke can’t take his eyes off the horizon.

Twenty years in the biz, and you’re an overnight sensation.
RT: Yeah, it’s been a long, f—ing night. A lot happened on the way to 2013. I was like Rocky hitting the meat for a couple of decades and then suddenly getting my shot at the title. I feel like I should run around inside the ring with my arms up.

Ro-cky! Ro-cky! Ro-cky!
RT: Of course, what’s great about popular culture is that you can only indulge in your success for so long before you have to go back to being a real artist again and putting in the hours. You have to get back to hitting the meat.

Do you feel pressure to outdo the success of “Blurred Lines”?
RT: No more pressure than I’ve always felt, which is a lot. Actually, the pressure was much more intense before “Blurred Lines.” There were some tough times, lots of near misses. But this success has gone beyond everything.

When did you realize this album was going galactic?
RT: When it started shooting to number one all through Europe. It hit faster there than it did here, and we said, “Uh-oh, looks like we caught one.” 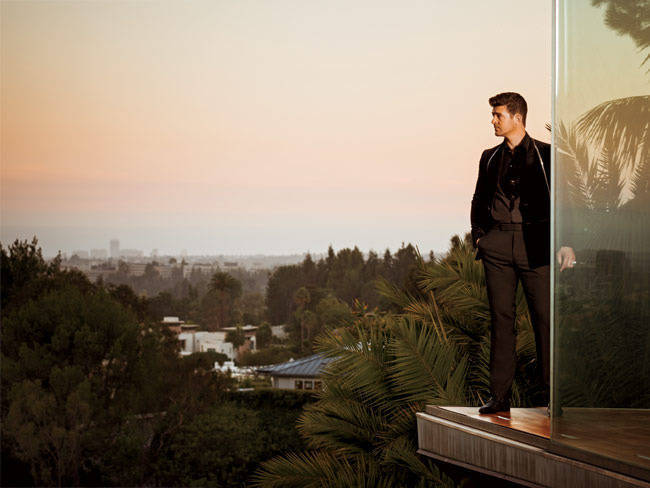 What made the difference this time around?
RT: The grooves and lyrics and vocals weren’t much different from the music I’d made before, so who knows? It’s almost dangerous to think about. If I take responsibility and say, “Well, my old music wasn’t good enough,” that ends up driving me into deep depression. So you just have to say, “Life moves in mysterious ways.” Put it this way: I’m happy it happened. Part of me was starting to think I wasn’t going to get to live out certain aspects of the dream.

But you’re living it now. What’s the wildest thing that’s happened?
RT: You think you’ve seen it all, but then you get teenage girls recognizing you and getting screamy. That was rare before. And guys are much more responsive than ever. It had always been women telling me that “The Sweetest Love” was their wedding song. Now men are, like, “Go, bro!” The “Blurred Lines” parodies were pretty entertaining. Someone cut together speeches by Bill Clinton so it looks like he’s singing the song. I’m a big fan of Bill Clinton.

Hugh Hefner dressed as you for Halloween.
RT: Life is surreal. But it’s always been that way for me.

What’s one standout memory about growing up with famous parents?
RT: Meeting Molly Ringwald rocked. I think I was around 9 or 10, and I was a huge fan of The Breakfast Club, Sixteen Candles, all that stuff. We were at a Dodgers game, and my dad heard Molly was there. [He asked me,] “Do you want to go meet her?” Next thing I know, [it was] “Oh my God, Molly Ringwald.” It was everything I could do not to pass out. 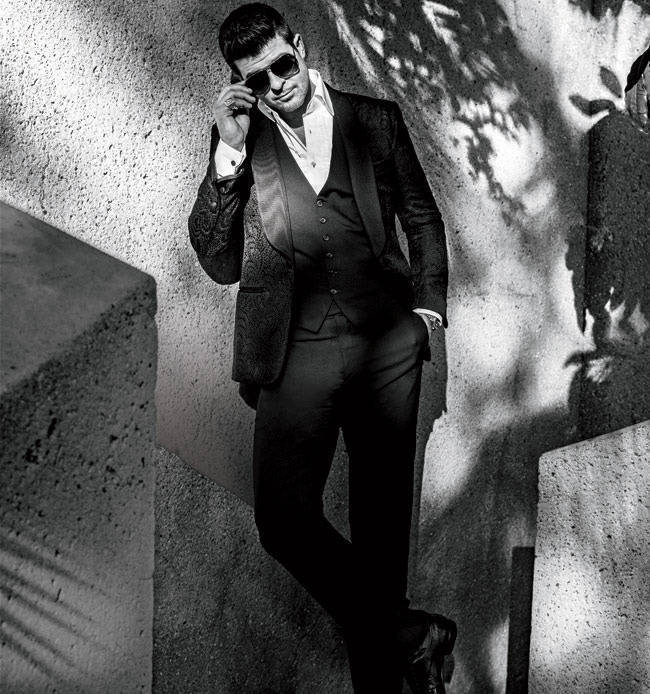 You weren’t too much older when you met the person who would become your wife. How’s she handling this explosion of attention?
RT: Obviously, she’s very excited. She’s supported me from day one. Sometimes she rolls her eyes. Things [I say] get misconstrued in interviews and then debated. So some of it’s pretty weird.

You mean the quotes that made you sound like a womanizer?
RT: Yeah. But I call these good problems because it means you’re being talked about. The rest of it you just try to manage day by day. My number-one priority is being a good person. I try to teach my little kid that every day. But, yeah, I have a big mouth. The only difference is, if I said something stupid at a dinner party before this year, nobody would read my quotes back to me the next day out of context.

By the way, was making that video as much fun as it looked?
RT: It was definitely an amazing time. You can tell by my energy, I wasn’t overly impressed by the whole thing. I wanted to keep it rolling so I could get home. I honestly had no idea it would be seen by so many millions of people. At first, I thought the topless version went too far, but then I showed it to my lady and all her girlfriends and they couldn’t take their eyes off it. Everybody was chuckling, turned on, angry, provoked. I thought, Yep, that feels right. Let’s roll the dice. 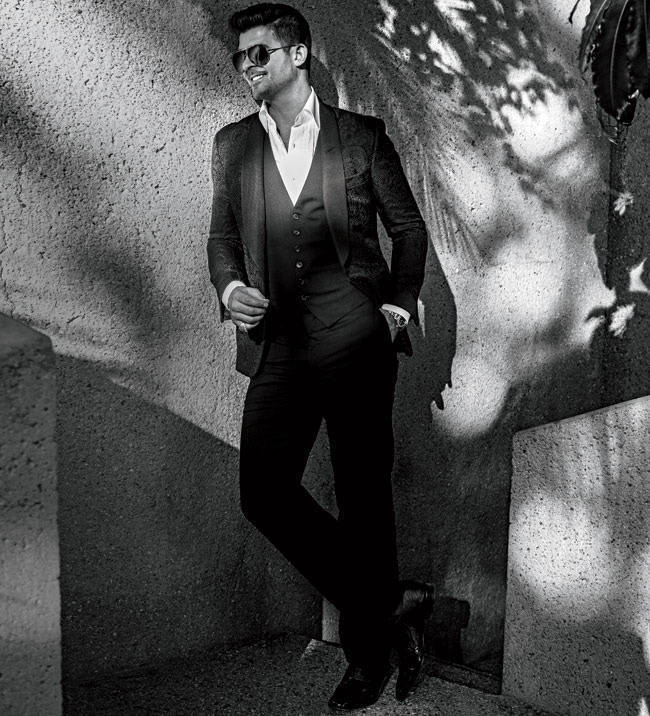 What’s your takeaway lesson from Twerkergate?
RT: Listen, we had a great time. It’s entertainment. I was actually afraid Miley’s routine wasn’t going to be racy enough. But people reacted.

The guy who invented the foam finger was outraged.
RT: I heard that. Is there a better use for it?

This is the Grammys issue. What’s fun about attending the show?
RT: Everybody’s there. I performed with Lil’ Wayne years ago on the Grammys, and as I finished my sound check and was walking down the hallway, there was Sir Paul McCartney and Robert Plant having a conversation. I thought, I’m not going to get in the way of that chitchat. But then I decided I’ve got to say hi to these legends. I walked up and started babbling about what an honor it is to meet you both, and Sir Paul just looks at me and goes, “You’ve got a great voice.” I thought, I can go home now.

What’s next for you?
RT: A little more touring and finally getting back into the studio. It’s been so strange not writing music all the time, especially with everything going on in my head and heart right now. Since I was 11 or 12, I’ve been writing songs every week, but this year I’ve gotten sidetracked. So I’m really excited to make new music.

Do you ever feel like the rest of us and say, “I can’t get that ‘Blurred Lines’ song out of my head”?
RT: It drives me crazy when I hear it, to be honest. When it comes on the radio, I’ll say, “Can you turn that down for a minute, please?” But it’s pretty incredible where it’s taken me, so I can’t complain.

Hey, hey, hey!
RT: You might be on to something there.