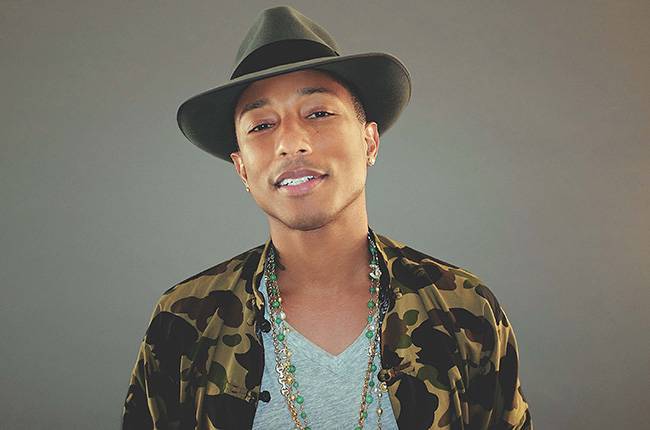 Pharrell Officialy made it. It was just a matter of time to see Pharrell going #1 On The Billboard Hot 100. After the huge success all over the world with the single ‘Happy’, Pharrell dethroned ‘Katy Perry‘s ‘Dark Horse’ from Number 1 after two weeks at No. 2, the song rises to the top, after four weeks at the summit.

All he needs now is the Oscar, tune in this weekend on Sunday for the Oscar Night, despite being nominated for the Oscar for ‘Best Song’ off ‘Despicable Me 2’, Pharrell will also perform the song on stage.

“Happy” tops the Hot 100 fueled largely by a 22% gain to 402,000 downloads sold, according to Nielsen SoundScan, and leads Digital Songs for a second week. The sum marks the biggest sales week for a song outside the Christmas season since the week ending Sept. 15, 2013, when Miley Cyrus‘ “Wrecking Ball” crashed No. 1 with 477,000 sold (after the song’s buzz-worthy video had debuted on Sept. 9).

“Happy” additionally pushes 4-2 on Radio Songs with a 28% surge to 139 million all-format audience impressions, according to Nielsen BDS, and hikes 7-4 on Streaming Songs with 6.1 million U.S. streams (up 38%), according to BDS. The song claims the Hot 100’s Airplay Gainer award for a fifth consecutive week and the Digital Gainer nod for a third straight frame. “Happy” concurrently spends a third week at No. 1 on Hot R&B/Hip-Hop Songs.