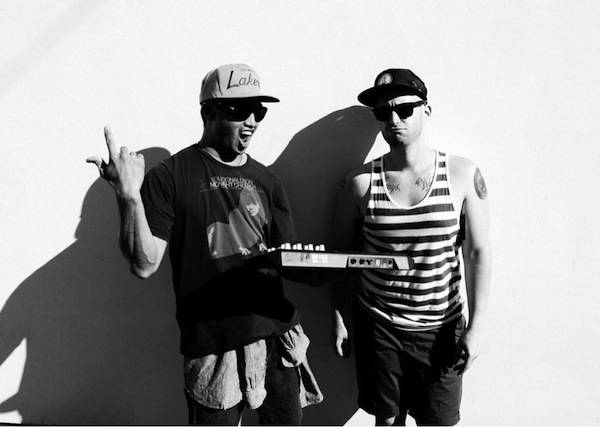 By Tim Cant. When we asked Chad Hugo to disclose the idea behind his DJ project MSSL CMMND, we got this rather philosophical response: “My soul shall live constantly because my mind never dies.” It was unexpected, and the rest of his interview continued in the same enigmatic vein. But perhaps we should have been expecting it considering this is a man who forms one half of legendary production duo The Neptunes.

Alongside fellow Neptune Pharrell Williams, Chad has produced classics such as Nelly’s Hot in Herre, Justin Timberlake’s Like I Love You, and Snoop Dogg’s Drop It Like It’s Hot. Along with Shay Haley, Hugo and Williams formed N*E*R*D and enjoyed hits of their own with Lapdance and She Wants To Move among others popular tracks.

MSSL CMMND – a DJ and production outfit who debuted last year with the well-received mixtape Why Fight The Space Age? – features Hugo alongside his DJ partner Daniel Biltmore. We caught up with them both to discover more about the project, how they came together, and why working out whilst mixing music is the way forward.

What’s your approach to putting together a live show?
Chad Hugo: “Right now, the live show consists of Daniel Biltmore and me. We get together, we make tunes together. We’ve been playing some of our own material, we’ve been remixing some classics… We’re a fan of various podcasts and other DJs. We pretty much keep it simple.”

When did you decide that DJing was the next step for you?
Chad: “We actually wanted to become sci-fi stars but we couldn’t find a camera crew at the time so we just started spinning records. But we really wanted to be sci-fi stars and put out crazy videos “I had a studio with Pharrell back in mid 2000 called the Hovercraft. My two N*E*R*D compadres moved south to Florida so I was left to run the ship. We experienced some problems with the locals so right now it’s a crossfit place – they run a gym. But during the time when I met Daniel, we devised this MSSL CMMND workout plan in which we were doing health regimens and physical training simultaneously with our DJing.”

How can you work out and concentrate on mixing at the same time?
Chad: “It’s quite simple, people do it all the time. When they play music, it’s about having the mind and body work in synchronisation, so it’s not just like sitting in a room. I’m sure you have your audiophiles listening to nice peaceful music on Sundays, but we try and combine the two – working on our tunes plus physical activity. “Play loud music, do some push-ups. Do ten push-ups, play a nice tune. We like it and we all clap. If we wanna do some jumping jacks we’ll go outside and ride our bicycles, or throw footballs. It’s kind of like the parks and recreation mentality. Some people stay up all night, you know. Instead of staying up all night getting smoked up, drunk and not knowing where you’re gonna be, it’s good to supplement that with some good healthy mind and body training.”

OK, so what’s the best sort of music for getting a physical and mental workout?
Chad: “Even if you’ve been out to a club until three or four am, it’s good to get up at six am when the sun rises and go for a run. Maybe you can play some ugly, harsh music in your house or apartment and leave, and run away from it. Put on some headphones and use that as your fuel. Sometimes music is the fuel, not food. It’s like nitrous oxide for your ears.”

In the video game Missile Command there are a torrent of missiles heading towards you, and you can fend them off for only so long before it’s death for you and the people you’re protecting. Is that what it feels like to you when you’re DJing?
Chad: “Sometimes it is. You look out into the crowd and there’s people’s anguish, there’s sadness, they’re wearing frowns. You don’t want that. Those are alienated thoughts and emotions. We just try to fire them off with the notes and records that we play.”

Daniel, how did you hook up with Chad originally?
Daniel Biltmore: “We had a mutual friend that Chad was doing a gig for at T-Mobile in 2009 in Baltimore, and wanted a local DJ to open up so he could get a feel for the crowd. I canceled everything I had that day and we kept in touch ever since then. Soon after that I started making trips down to the Hovercraft, the old Neptunes studio in Virginia, pretty much every chance I could get. I went on the road with him a little bit, just trying to absorb and learn as much as possible.”

And what did you learn?
Daniel: “That there are no shortcuts! I thought ‘I’ve made it’, but it’s been five years and there have been some really high highs, and some really low lows. That’s just how life is. I’ve had the opportunity to experience some really amazing things and I’m very appreciative of that. I probably wouldn’t be doing production if it weren’t for them – I’d probably be just DJing and not doing it as a full time job. I’d just finished grad school and I took it as a sign to continue doing music.”

When did you first know you wanted to be a DJ?
Daniel: “An embarrassingly long time ago. Sometime in high school I started noticing there were a lot of records I wanted that I could only find on vinyl. I started buying vinyl before I had any turntables to play it on – when the Mo’ Wax stuff was coming up. I was a big Portishead fan, and I still love all that music today.”

What kit did you use when you started DJing?
Daniel: “I had some terrible equipment! It was like a Gemini Scratch Master mixer and one Technics 1600 that I thought would be better than the 1200 because it had a bigger number! It had a rotating knob for the pitch control, which made it virtually impossible to know exactly what you were doing with the pitch. Then I had a Technics belt drive that I used as my second turntable.”

What DJs inspired you at the time?
Daniel: “Because of Mo’ Wax, DJ Shadow was obviously a big influence on me. Another person that I really looked up to was Spinbad and the mixtapes he did, like the 80s mix, I think it’s part 2 that’s the one everyone knows really well. That was sort of a blueprint for a lot of forward-thinking mixtapes. “After that series, people started being a little more creative. Also, DJ Neil Armstrong who has been one of my mentors. He makes amazing mixtapes and I spent a lot of time trying to copy off of him when I started putting things together. “I guess another producer I look up to and always have is Prince Paul. The early De La Soul records were important in informing me what sort of samples and things you can throw into a mix or a song.”

What’s your approach to making a mixtape nowadays?
Daniel: “I like to do a few things that are clever, and insert things that only people who listen really intently are going to notice. Maybe its really clichéd to say, ‘It takes you on a journey,’ but for me it’s really important to have a proper texture to it. I almost always have the tempo slow, medium and high, then back to slow. Atmosphere is really important to me.”

How do you put a mixtape together?
Daniel: “For years I was just doing everything live. I still do that but right now I’m using Ableton Live, and if I’m playing it live I’m recording it into GarageBand. For prerecorded mixes, I’m doing everything – including my production – in Ableton Live. I like using a lot of samples and mirror what the song is doing. That was something I pulled from the Spinbad mixes – taking a sample of a word that’s repeated often in the song and throwing it in there. It becomes this cut and paste thing.”

A criticism of making mixtapes “offline” in software is that there’s no danger anything can go wrong. How do you go about making sure your mixtapes don’t sound too polished?
Daniel: “I agree with you 100 per cent. I still prefer to do them live, even though there’s going to be a mistake here and there. Honestly, the only reason I would do a recorded one is because everyone else in the world is doing it! Everyone else’s sounds perfect, so I can’t be the guy who doesn’t! It’s unfortunate – I still look at building a mixtape with production software very similar to just creating a compilation… it’s almost half way to making an album. “When I do something live, I plan it out for the most part but I also throw in stuff that I don’t plan for. I try to include as much original material, and as much material that wouldn’t necessarily fit onto a typical mixtape. Maybe not music, but some funny sound clips, intros and outros, and that sort of thing to make it unique. Still, it’s difficult when everyone is sitting in a studio and hammering these things out.”

In 2012, DJ Shadow was kicked off the decks of a Miami nightclub because the management were unhappy with the music he was playing. Do you ever feel you have to compromise your artistic vision for an audience?
Daniel: “Absolutely, it happens all the time. Really you’re there to assist the crowd. Then maybe there are times when the crowd is more there for you. But it’s something I wrestle with during every set. I really try to insert some of my own tastes and preferences no matter who the crowd is, but I don’t personally want to clear dance floors so if I have to go in that direction and play things I don’t necessarily want to, I’ll at least try and do it in a way that I find respectable. “It took a long time for me to understand popular music, and respect it for it’s maybe intentional lack of content. When I met Chad and he explained to me the idea behind The Neptunes, it kind of threw me for a bit because they know everything – they know all the obscure stuff and all the weird regional music. They’re fans just like we are. “Chad told me the intention was to take underground sounds and present them in a way that was palatable to a mainstream audience. It made me look at The Neptunes’ production in a very different way, and respect them infinitely more.”