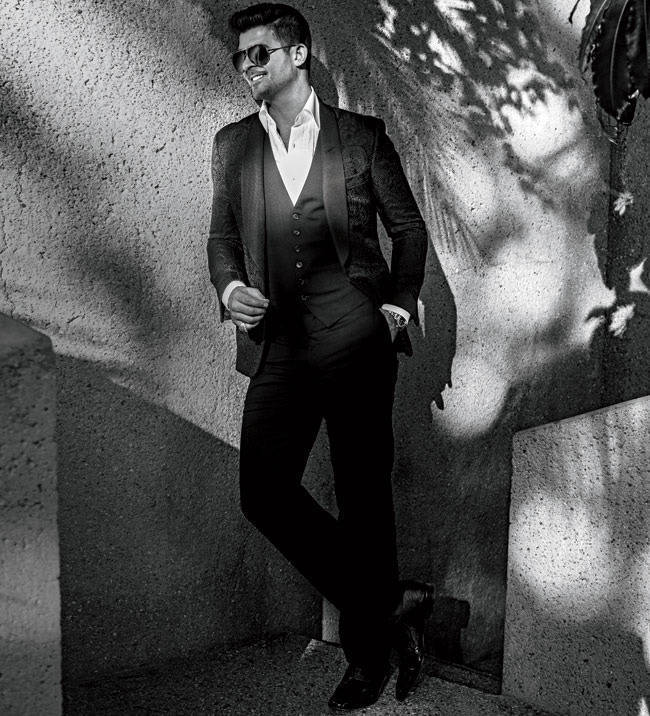 Alan Thicke says his pop-star son Robin Thicke is handling the turmoil of his split with actress-wife Paula Patton “very effectively through his music right now.” “He is in the midst of a new album that is very emotional and dynamic and a lot of power and incredibly musical, and he’s sounding great,” Thicke said in a recent interview to promote his new reality/comedy series, “Unusually Thicke.”

“So the fact that he is pouring himself into this creative artistry is a great thing, I’m happy for that.” The “Blurred Lines” singer, who has cancelled a couple of shows due to vocal issues since announcing his separation from wife Patton in February, is among the stars who appear in “Unusually Thicke.”

Premiering Wednesday at 10 p.m. on Slice, the reality/sitcom hybrid follows Thicke, model-wife Tanya and their family — which also includes sons Carter and Brennan, owner of a marijuana dispensary — in Santa Barbara, Calif. “I think my favourite side of Robin that a lot of people don’t get to see is what a great dad he is,” said Tanya. “He is such a good dad and he is such a disciplinarian to (son) Julian.”

“I remember asking him, ‘Robin, wow, you’re always disciplining Julian, and Julian says “thank you” and “please” and everything,’ and it’s like, ‘Yeah, well you know dad — dad didn’t ever discipline me,'” she added with a laugh. Thicke, 67, admits it’s the truth. “My kids will all tell you that I was way too liberal, too indulging, too casual with them. Casual not in the sense that I didn’t care or wasn’t watching or wasn’t there, but casual in that you always want to kind of trust them and hope that they’re smarter than teenagers really are.”