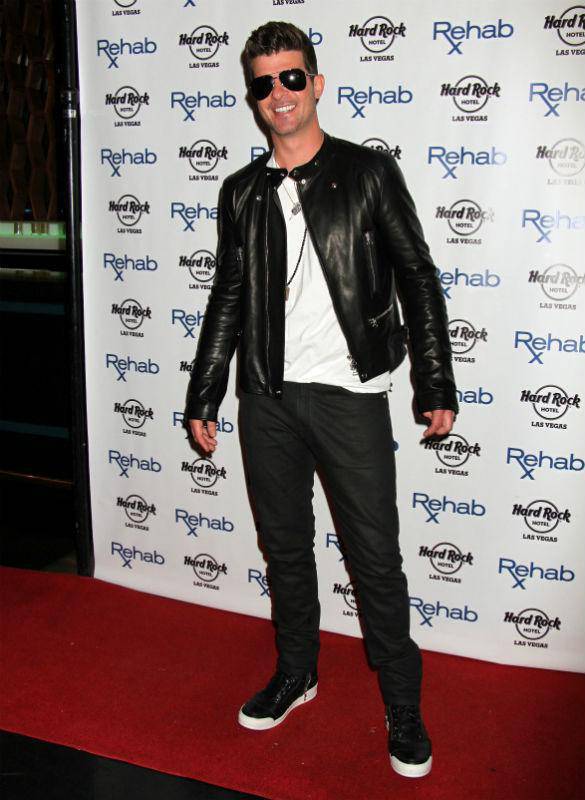 Robin Thicke’s Blurred Lines Beats Adele And Maroon 5 To Be Named Most Downloaded Track Of All Time. Track has sold a whopping 1.54 million copies. Robin Thicke’s much-talked about summer 2013 smash hit Blurred Lines has now been named as the UK’s most downloaded music track of all time. The controversial song beat the likes of Maroon 5 feat. Christina Aguilera’s Moves Like Jagger, Gotye’s Somebody That I Used To Know and I Got A Feeling by the Black Eyed Peas, leaving Adele’s Someone Like You in the number two spot.

Despite selling a whopping 1.54 million copies since it was released last May, Robin’s lyrics and the numerous gorgeous ladies gyrating around him in the music video had people talking, with women’s rights groups claiming that the singer was “sexist.” It has since been banned from being played in numerous universities around the UK, but still managed to top the All-time Official Download Chart Top 100, compiled by the Official Charts Company. Not bad!

Thicke told OfficialCharts.com of the Pharrell Williams produced track: “I’m so honoured, the success of ‘Blurred Lines‘ is a dream come true.” Official Charts Company chief executive Martin Talbot added: “‘Blurred Lines‘ is surely one of the catchiest pop hits of all time, so its success is no great surprise. “But to become one of only two tracks to have been downloaded 1.5m times and climb to the top of the poll as the biggest download of all time is an incredible achievement.” Check out the all-time official download chart top 10 below: