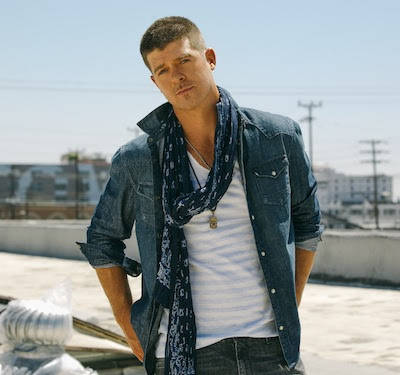 A new Robin Thicke album is coming out later this year. The R&B superstar announced the release date of his seventh studio effort in a short video that he uploaded to Instagram on Thursday, May 22. The yet-to-be-titled LP is scheduled to arrive on July 1 via Star Trak/Interscope Records. According to some reports, the record was written and produced entirely by the singer himself.

It has so far spawned a single titled “Get Her Back“, which fans believe was written by Thicke with estranged wife Paula Patton in mind. The 37-year-old singer debuted the song during his set at Billboard Music Awards on Sunday, May 18. He also performed the slow-tempo jam with “The Voice” winner Josh Kaufman during the competition’s season finale earlier this week.

Thicke put out his latest album, “Blurred Lines“, last July. The record debuted at No. 1 on Billboard 200. Its lead single “Blurred Lines“, which features guest vocals from Pharrell Williams and T.I., ruled the Billboard Hot 100 chart for 12 weeks. Thanks to Molly.