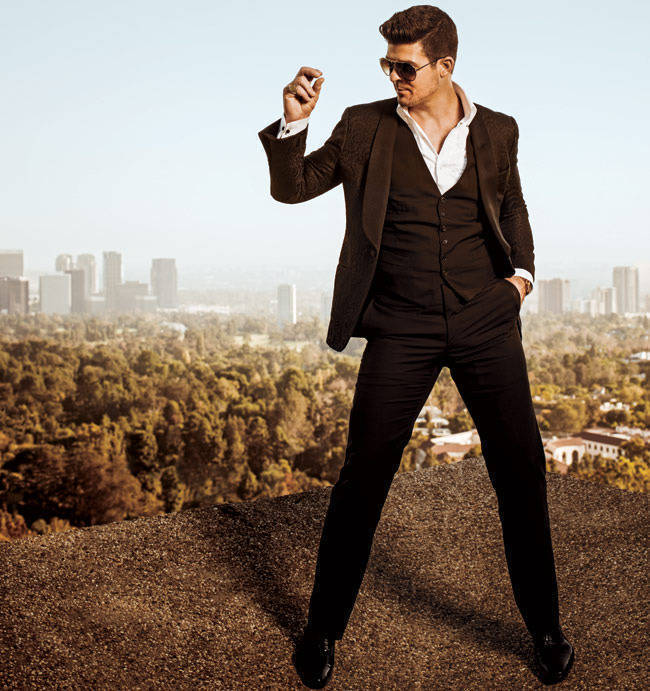 Interrogated for allegedly ripping off Marvin Gaye, the singer attempts a rock ‘n’ roll defense: “I didn’t do a single interview last year without being high” “Blurred Lines,” the pop hit that quickly became one of the most fascinating and controversial songs of the young century, has now spawned even more to discuss thanks to the appearance of absolutely bizarre depositions given by the song’s singer, Robin Thicke, and producer Pharrell Williams.

The sworn testimony, revealed for the first time in a Los Angeles federal court on Monday, covers such subjects as authorship, song credit, drug abuse and media promotion, and almost certainly will change perceptions of a hit recording that was dubbed last year’s Song Of The Summer. When “Blurred Lines” was released in March 2013, the catchy harmony became a cultural phenomenon, but since then, there’s been substantial reassessment of what the song is all about.

In some corners of the public, “Blurred Lines,” with lyrics that include “Good girl, I know you want it,” has been attacked as “kind of rapey.” And in the past few months, Thicke has had to endure accusations of misogyny. Then there’s the lawsuit filed by Thicke, Williams and song co-writer Clifford “T.I.” Harris Jr. in an effort to protect “Blurred Lines” against claims of being a rip-off. They’re facing off against the children of Marvin Gaye, who in a cross-complaint accuse the plaintiffs of making an unauthorized derivative of their father’s 1977 classic “Got To Give It Up.”

Last week, Gaye’s family filed summary motion papers and also lodged an audio mash-up of the two songs in an effort to win the case. A good portion of the court documents were designated as confidential, but after some back-and-forth between the parties, a judge has ordered that transcripts of the celebrities’ depositions shouldn’t be sealed. The Hollywood Reporter has obtained copies of the sensational testimony. Thicke and Williams gave their depositions this past April, and they were both incredibly hostile.

For example, when Richard Busch, attorney for the Gayes, attempted to play the mash-up for Thicke to hear, the singer begged him to stop. “It’s so hard to listen to it,” said Thicke, referencing a clash between major and minor chords. “It’s like nails on a f—ing chalkboard. … This is [like] Stanley Kubrick’s movie Clockwork Orange. Where he has to sit there and watch … Mozart would be rolling in his grave right now.” The deposition turns even more strange once Thicke is forced to explain his many statements to the media about how Gaye has inspired him.

For example, he once told GQ magazine, “Pharrell and I were in the studio and I told him that one of my favorite songs of all time was Marvin Gaye’s ‘Got To Give It Up.’ I was like, ‘Damn, we should make something like that, something with that groove.’ Then he started playing a little something and we literally wrote the song in about a half hour and recorded it.” But that’s not actually what happened, Thicke now admits. The singer says under oath that after writing and producing six albums himself, “I was jealous and I wanted some of the credit … I tried to take credit for it later because [Williams] wrote the whole thing pretty much by himself and I was envious of that.” In his deposition, Thicke soon gets more specific:

“Q: Were you present during the creation of ‘Blurred Lines’?
Thicke: I was present. Obviously, I sang it. I had to be there.

Q: When the rhythm track was being created, were you there with Pharrell?
Thicke: To be honest, that’s the only part where — I was high on Vicodin and alcohol when I showed up at the studio. So my recollection is when we made the song, I thought I wanted — I — I wanted to be more involved than I actually was by the time, nine months later, it became a huge hit and I wanted credit. So I started kind of convincing myself that I was a little more part of it than I was and I — because I didn’t want him — I wanted some credit for this big hit. But the reality is, is that Pharrell had the beat and he wrote almost every single part of the song.”

Thicke says he was just “lucky enough to be in the room” when Williams wrote the song. Afterward, he gave interviews to outlets like Billboard where he repeated the false origin story surrounding “Blurred Lines” because he says he “thought it would help sell records.” But he also states he hardly remembers his specific media comments because he “had a drug and alcohol problem for the year” and “didn’t do a sober interview.” In fact, when he appeared on Oprah Winfrey’s show with his young son and talked about how weird it was to be in the midst of a legal battle with the family of a legendary soul singer who “inspires almost half of my music,”

Thicke admits he was drunk and taking Norco — “which is like two Vicodin in one pill,” he says. The singer addresses his honesty (“I told my wife the truth. That’s why she left me.”) and after saying he’s been sober for many months, clarifies toward the end of the deposition that he’s given up Vicodin but not alcohol. Despite having limited input into the creation of “Blurred Lines,” Thicke was given a co-writer credit, which he says entitles him to about 18-22 percent of publishing royalties.

Why would Williams be so generous? “This is what happens every day in our industry,” said Williams during his own deposition. “You know, people are made to look like they have much more authorship in the situation than they actually do. So that’s where the embellishment comes in.” Williams‘ own testimony also got off to a belligerent start. At one point during the examination, Williams says he can read music, but then is shown a transcription of a song, and is asked to identify notes and durations. “I’m not comfortable,” Williams responds eight times as Busch presses to figure out whether he really can read music.

The producer is evasive in other ways. Asked whether Marvin Gaye has influenced him, Williams says, “He’s an Aries. I respect him.” Williams says he didn’t go into the studio with the intention of making anything sound like Gaye. He takes the attorneys through his creative process and why the session on “Blurred Lines” was a bit different. “When I work with a person, I think about three things,” he says. “I think about the energy that they’re coming with, but this wasn’t the case because [Thicke] wasn’t there yet.

But usually, I think about the energy and what they come in with, like what’s on their mind, you know, argument with a girlfriend, email with the husband, politics, state of the world. People walk in with vibes. They walk in with feelings. This was not one of those days.” The producer says he was in the “driver’s seat” on this particular song, but does give Thicke some credit in a rather interesting section that seems to imply that white people are victims and beneficiaries of racial discrimination in the music business:

“Q: In your view, what holds ‘Blurred Lines’ together throughout the different sections?
Williams: What holds it together?

Q: Does the bass line and the keyboard hold the songs together through the different sections?
A: No.

Q: Why not?
A: Because it’s the white man singing soulfully and we, unfortunately, in this country don’t get enough — we don’t get to hear that as often, so we get excited by it when the mainstream gives that a shot. But there’s a lot of incredibly talented white folk with really soulful vocals, so when we’re able to give them a shot — and when I say ‘we,’ I mean like as in the public gives them a shot to be heard, then you hear the Justin Timberlakes and you hear the Christina Aguileras and you hear, you know, all of these masterful voices that have just been given, you know, an opportunity to be heard because they’re doing something different.”

Williams then adds that if he had sung the song, “It wouldn’t be what it was — what it is today.” He admits, though, it’s his song. Asked whose creation were the “Blurred Lines” words, he answers, “Mine.” How all this fits into the ongoing lawsuit is an intriguing question in and of itself. In attempting to keep the depositions private, Howard King and Seth Miller — attorneys for Thicke and Williams — argued that they were hardly relevant and merely intended to “distract attention from the real issues and to embarrass, harass, and annoy Plaintiffs.”

They begged the judge to take note of the fact that celebrity depositions can be the subject of “untoward media exploitation and public scrutiny,” and instructed the judge, “Google ‘Justin Bieber deposition.'” (The attorneys were at least successful in getting the judge to keep private the videotaped version of the depositions.) The transcripts of the depositions don’t necessarily refute the plaintiffs’ contention in their own summary judgment motion that “Blurred Lines” and “Got To Give It Up” are not substantially similar for purposes of a copyright analysis, but on the road to a trial that is currently scheduled for February 10, 2015, the Gayes believe they have ammunition to destroy the plaintiffs’ credibility and honor.

“Thicke, for his part, now claims he made all of his statements while drunk or on drugs, none of them true, and he mentioned Marvin Gaye only to sell records,” states the counter-claimants’ court papers. “He also actually testified that he is not an honest person. This complete contempt for the judicial system, and their obligations to tell the truth, can best be summed up by Thicke’s ultimate admission, while under oath, that he ‘[does not] give a f—k’ about this litigation.” In response to today’s revelations, attorney Howard King of King, Holmes, Paterno & Berliner issued a statement on behalf of Thicke, stating that “Robin’s moment of personal vulnerability is being exploited in the hope of diverting attention from the obvious weakness of their legal claim.”