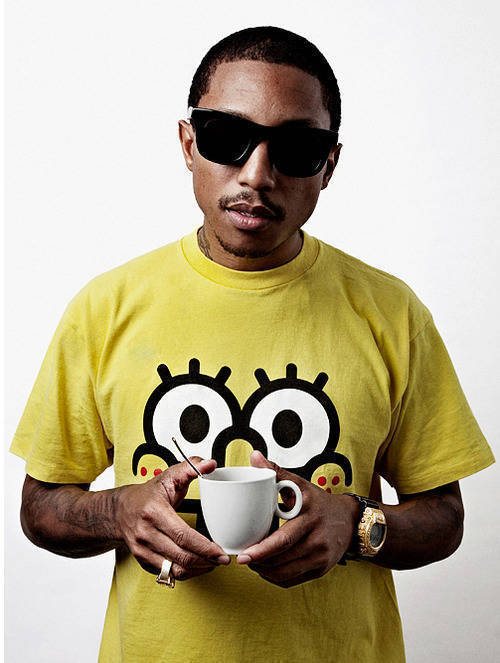 Regardless of what you believe, science tells us that we started out as primordial star slime,” says Pharrell Williams. “Things didn’t have to work out for us, you know.” I’m having a deep and meaningful with one of the most powerful men in music about God, the universe and the human race’s responsibilities to nature. As you do. “I believe in a God,” he says.

“There are people who don’t but, either way, the earth is our home – that’s something we can’t dispute, and we need to take care of it. This is me saying, ‘Let’s do something for the planet.’” What, specifically, he has in mind concerns the unlikely coupling of ocean conservation with fashion – deep subjects, both. Elemental forces, you might say. Water and clothing, two things the human race cannot live without. “If our oceans die, we die,” as Paul Watson from Sea Shepherd puts it.

The Sea Shepherd Conservation Society, which agitates for marine life protection, is relevant here because Watson, the salty old sea dog who leads it, has been sharing stage time with Williams recently, not performing, obviously (although he does look a bit Hendrix-y in his military jacket), but trying to educate people about what a nightmare this ocean plastic business is. A flabbergasting 3.5 million pieces of plastic end up in the ocean EVERY SINGLE DAY. The Great Pacific Garbage Patch – also called the Trash Vortex, because rotating currents drag rubbish here from far and wide, spinning into a vast, choking plastic soup – floats between the US and Japan, and is about the size of Turkey.

Some of it is so dense with refuse, much from ships (fishing nets, splintered containers), it resembles a land mass from the air. Other sections look like cloudy water; milky, mysterious, even quite pretty. Up close, the reality is less poetic: that opacity is created by millions of particles of micro plastic (formerly known as the bottle you drank your Coke from, takeaway containers, grocery bags, polystyrene vpackaging) – broken down, yes, but not degrading for hundreds of years. This gunk enters the food chain, eaten by fish that mistake it for plankton, which are then eaten by us. Delicious. Never mind that it’s made from petrochemicals in thefirst place; as it degrades, the plastic sucks up heavy metals and other pollutants from the water.

According to National Geographic, ocean plastics “absorb pollutants, such as environmental pollutant and probable human carcinogen polychlorinated biphenyls” (PCBs). The “probable” bit makes it sounds nicer than it is. You don’t want to eat this stuff any more than Nemo does. But Williams wants you to wear it – before it gets to the grim, chemicals ink micro level. And it’s a very clever idea. Rewind. It’s a Friday evening in September, and Williams is holding court at a New York fashion week happening dubbed Ocean Night. He is be-hatted (not that Vivienne Westwood Buffalo number; this is a subtler one by LA milliner Nick Fouquet), and wearing red Chanel trainers with a denim bomber and jeans both by G-Star RAW For The Oceans (RFTO).

By day, 23 Wall Street is a bank, but tonight it has been transformed into a surreal, throbbing underwater mirage. Models posed in custombuilt ‘aquariums’ wearing G-Star’s spring/summer RFTO ’15 collection, co-designed by Williams and made using Bionic Yarn. The latter is an “innovative eco super thread” made, in part, from recycled plastic bottles. Not the ones from your council bin. These are harvested from beaches around the world by local agencies (including Tangaroa Blue in Queensland) with Parley for the Oceans, an ocean-preservation initiative, as go-between.

Parley sells this flotsam to Bionic Yarn as raw material, and Bionic Yarn, which Williams co-owns, breaks it down into chips, puts it through the polyester manufacturing process and blends it with other fibres (mostly cotton) to make denim, jersey, canvas, whatever. Touch the cloth and you’d never guess its origins. G-Star’s global brand director, Shubhankar Ray, says the project is about rethinking sustainable fashion, and “turning a problem into a product”.

“We take the bottles off the shorelines because, as yet, there is no open ocean recovery technology available,” explains Tim Coombs, who co-founded Bionic Yarn with school buddy Tyson Toussant nine years ago in New York. “It was when the mayor stopped recycling. The amount of plastic being dumped in the streets and overflowing from the garbage cans made us want to take things into our own hands.” Both product designers, outdoorsy types “working on tents and sleeping bags”, they’d heard about polyester made from recycled plastics but found early prototypes “low-grade and gimmicky”. They took the idea and ran with it. Williams invested in 2009.

Williams, 41, is a busy man. Last year alone he topped the charts with his second solo album, Girl, performed at the Oscars, designed T-shirts for Uniqlo, bags (inspired by steam trains!) for French luxury brand Moynat and a perfume with Comme Des Garçons. For Chanel’s Métier d’Arts show in Salzburg, he starred in a musical mini-movie with Cara Delevingne. He found time to coach on the US The Voice, submit to interview by Oprah and produce Christina Aguilera’s upcoming album. Ask how he juggles it all, and he says, “Fashion and music are one and the same, aren’t they? What does a musician wear, what does a model walk to? Right?” Fact is, he’s a force of nature. He must eat his spinach.

As part of powerhouse production duo The Neptunes and band N*E*R*D, he’s a seven-time Grammy Award-winner. “Pharrell has his sonic DNA in most music of today, from Jay-Z to Gwen Stefani to Daft Punk, so as an artist he’s a polymath,” says Ray. “He’s also very smart in terms of using his celebrity to refresh pop culture and do something good at the same time, like helping the oceans without being a tree-hugger or preachy. He is universal and special.” In January, Williams was in Davos, Switzerland, at the World Economic Forum – the annual schmooze-a-thon for the world’s power elite – with Al Gore, announcing the return of the Live Earth concerts to raise awareness about climate change.

The first ones were staged simultaneously in five cities in 2007 and Williams performed in Rio. This time the date is set for June 18, with venues in Paris, New York, Brazil, South Africa, China and Australia – and Williams will be creative director. i am Other is his record companycum-creative hub, which includes Bionic Yarn. Its manifesto says: “History has proven that it’s the rule-breakers who have the power to change the world.” ‘Others’ are defined as “a diverse group of optimistic, bright minds connected by technology and a desire to make our mark, who together can advance culture and even humanity”. Deeper than your average pop song.

I ask what drives him. “I don’t know,” he says, before a monster pause. “I’m just trying to play my part in this giant movie we call life.” Then he adds in his Virginia drawl: “We are living in a different time right now. There is so much panic, people are worried, people don’t know whether they are going to survive tomorrow, there is disease, there is war. The thing that encourages me is [when] I see other people be so strong, and remember their resilience, their ability to survive.

All the pestilence, all the war, all the disease, the pollution and the sickness we allow our earth to incur, based on our own greed, and us taking our eye off the ball – I think that’s going to change. I think this [G-Star] collaboration is just one of many examples of things happening right now in the world [to make positive change].” There’s still hope for a happy ending.