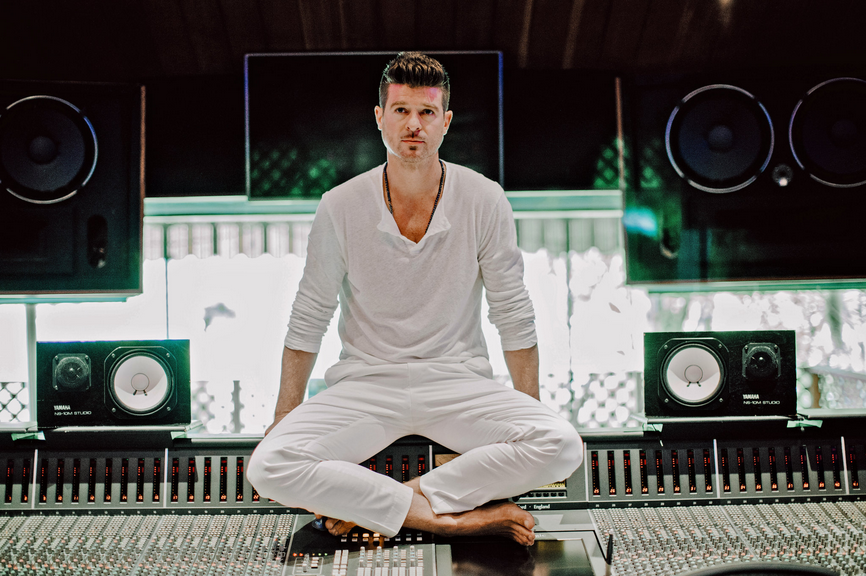 By Nadeska Alexis. We haven’t heard much from Robin Thicke since he released his 2014 album Paula, which came and went without much success. The singer’s name has made headlines mostly in the context of the copyright lawsuit against his hit song “Blurred Lines,” which he and Pharrell lost to Marvin Gaye’s estate. Now, he’s finally opened up in an interview with The New York Times.

Thicke spoke not only about the outcome of the lawsuit that he plans to appeal, but also about the dissolution of his marriage to actress Paula Patton. He admitted, right off the bat, that he didn’t expect to lose the lawsuit. “I was surprised. Very surprised,” he said. “Obviously, that’s why we’re appealing. I know the difference between inspiration and theft. I’m constantly inspired, but I would never steal. And neither would Pharrell.”

*mtv.com
Thicke also owned up to the fact that he told completely different stories, first to the press and later during his court deposition, about how much he was involving in actually writing the song. “What I will — what I can say — is that when I did the deposition, it was two weeks after my separation from my wife,” he explained. “I was going through personal hell at the time.”

“And I was careless in the deposition. My personal issues were all that mattered to me at the time. That’s why I use the word ’careless’ to describe my attitude at the time. Obviously, I didn’t give my all to the trial. It simply wasn’t as important to me as what was going on in my personal life. I was lost at the time.”

And the 38-year-old singer certainly didn’t hold back when it came to the topic of divorcing actress Paula Patton, who he was in a relationship with for over 20 years. He revealed that his team did not want him to release the album Paula, and it was a friend who finally pointed out that he was embarrassing himself with his attempts to revive the relationship.

“My supersaturation came right after I performed on the BET Awards [in June 2014]. I dedicated the performance [of the song ’Forever Love’] to my ex,” he explained. “And I came home, and my best friend of 20 years, Craig Crawford, said, ’I saw your BET performance.’ And I said: ’Oh yeah! What did you think?’ You know — excited. And he goes: ’I gotta be honest with you, buddy. You’re kind of playing yourself. You look like a sucker.’

It was in that moment that Thicke realized he needed to step out of the spotlight completely. “It hit me that I’d lost my perspective. What I thought was romantic was just embarrassing. And he said, ’You should just go away for a while.’ So I shut everything down. I took some time off to be with my son, and to be with my family and close friends. And the more time I took off, the more everything became clear.” Although he’s still laying low, Thicke is hoping to release a new album tentatively titled Morning Sun later this year.