As NBC’s The Voice prepares for its ninth season this fall, EW has your exclusive first look at what fans can expect — including Gwen Stefani’s return to the red swivel chair. In this exclusive clip, Stefani, Adam Levine, Blake Shelton, and Pharrell Williams reflect on the spirit of the NBC series. And while the contest may be fierce, there appears to be nothing but love between the coaches as they gear up to judge a fresh batch of talented hopefuls.

“This is a show that allows us to show these people how special they are and what good they can do in the world if they just continue to believe in themselves,” Williams says. Stefani announced she would be returning to the music competition back in June, saying, “I’m coming back and am so excited! I can’t believe I get to return to The Voice. It’s so inspiring to be around such incredible talent and music. I’m looking forward to working again with Adam, Blake and Pharrell. I love those guys.”

Recently, The Voice added several performers to its advisor roster. Selena Gomez, Brad Paisley, and John Fogerty have all signed on to be team advisors, along with Rihanna, who will act as a key advisor to all of the judges this season. Check out the exclusive first-look photo and clip above before The Voice returns Sept. 21 at 8 p.m. ET on NBC. 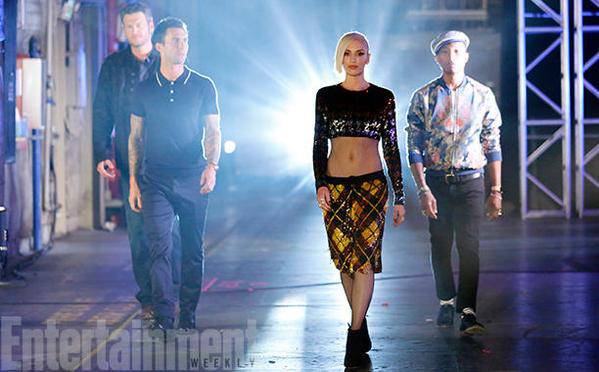