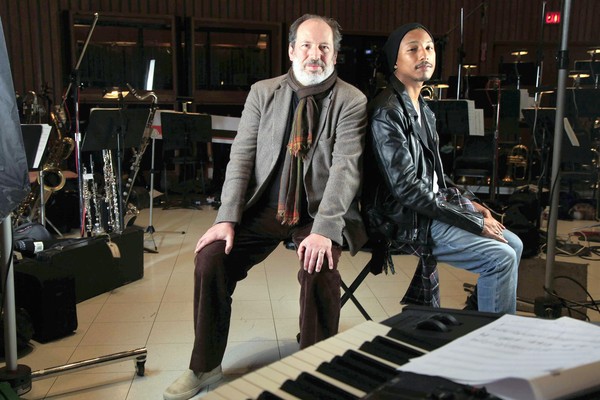 The composers for Hidden Figures recently spoke about their scoring process, and how they tried to subvert “assumptions about the way space and space exploration should sound.” A film’s music does crucial work in underscoring and reinforcing its tone and themes, and the Hidden Figures team wanted their score to push back against tropes as much the movie’s narrative. As someone who isn’t particularly musical, I found the insights into how music might reinforce a dominant cultural narrative–for example, the idea that space exploration is done by people who look like Bruce Willis–pretty fascinating.

Hans Zimmer, Pharrell Williams and Benjamin Wallfisch are the co-composing trio behind the score. Williams is also a producer on the film, which tells the story of Katherine G. Johnson, Dorothy Vaughan and Mary Jackson, three African-American mathematicians whose calculations made it possible for NASA to launch John Glenn into orbit.

*themarysue.com
Zimmer said that, in a typical NASA movie, “Either you have the idea of mathematics, which is the Philip Glass thing, or you have preconceived ideas like The Right Stuff or Apollo 13. But nothing in the music ever hints at an African-American, let alone female, undercurrent.” As a result, the composing team played with musicality to put a twist on standard elements of a space movie score. For example, they would include an “Aaron Copland type” trumpet, but “as if Miles Davis played it.” This sort of maneuver lets Hidden Figures sound like an identifiably NASA-mission film, but with touch of challenge and surprise.

Williams was also concerned about diversity in the movie’s staff, and he convinced Zimmer to hire a large number of female and African-American musicians for the project. “We flew players in from all over the country,” said Zimmer, “and we had this truly extraordinary string section. The sound was more beautiful and more committed…because everybody knew what they were playing because they were playing about themselves. And that is sort of the way music is supposed to work.” They also brought in Herbie Hancock, the Grammy-winning jazz pianist who played with the Miles Davis Quarter, to play a number of the songs.

As Williams said in an earlier Vulture interview, “One of the things I learned from [Zimmer] about the scoring of this movie is objectivity, asking, ‘This may sound good, but what does it do? What does it mean?’ The music always needs to be supporting the story.” Personally, I’ll admit I haven’t always paid close attention to film scores in the past, but I’ll be listening a little more attentively in the future, especially when Hidden Figures hits theaters on December 25.