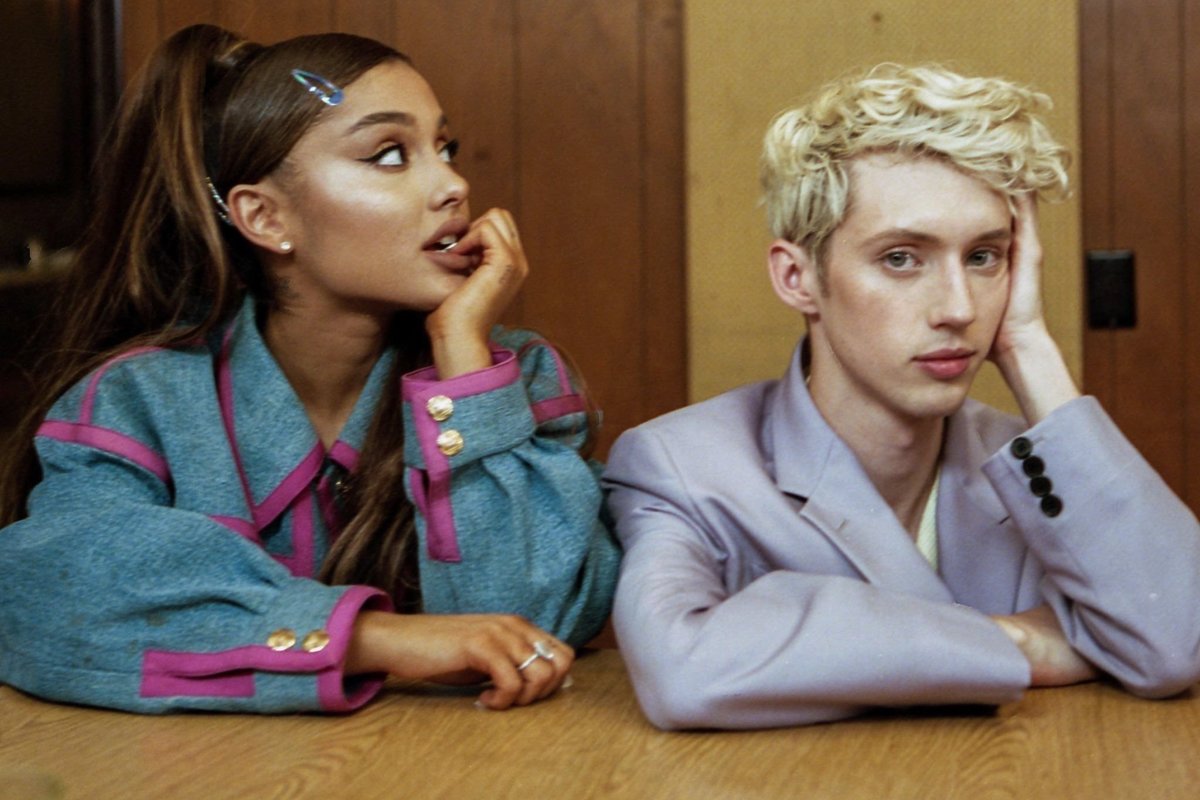 Ariana Grande, who released her fourth album Sweetener this month, PAPER has put Troye Sivan and Ariana Grande in conversation to talk about creating Sweetener, working with Pharrell Williams and more.

PAPER: How do you view Sweetener in relation to 2016’s Dangerous Woman, which felt like such a liberated, sexually powerful, feminist album?
Ariana Grande: Dangerous Woman is a part of who I am, and of course, there’s a still a little bit of her in Sweetener, with “God Is a Woman,” and with “Borderline” — definitely with those two records. But this record is way more feel-good, and I wanted to make people feel really good when they listen to this. The thing that my friends say when they listen to this album is, “This feels like the girl we hang out with.” When they listen they’re like, “This is our friend.” You know what I mean?

Troye Sivan: Yeah, well, I want to just mention one specific song. The one… what’s it’s fucking called? It’s the one with all of the vocal layers [sings].
AG: “Get Well Soon”?

TS: Okay, so that shook me to my core. You did that one with Pharrell [Williams], right? And I had never heard you sing like something that… that I think is the most personal thing I’ve ever heard you sing. It just felt so real and… I don’t know, just like really really, really personal and down to earth.
AG: Really?

TS: I feel like that song is going to mean so much to so many people. And so, what do you think that shift to writing something as personal as that means? Did you have more of a hand in the writing room or was it with Pharrell? How did you arrive to something as vulnerable as that? Because that’s scary in a writing room to be that vulnerable.
AG: First of all, thank you and I love you so much with my whole heart. But overall, [Pharrell] kind of forced it out of me, because I was in a really bad place mentally. I’ve always had anxiety, I’ve had anxiety for years. But when I got home from tour it reached a very different, intense peak. It became physical and I was not going out at all, and I felt like I was outside my body. I’d have these spells every now and then where I felt like I was having déjà vu, but like 24/7 for three months at a time. It was really weird, and all that was on my mind. [Pharrell] was like, “You have to write about it. You need to make this into music and get this shit out, and I promise it will heal you.” And it definitely helped. It still took me a few weeks to feel better, but looking back at it now from a healthier place, it’s probably one of the most important songs I’ll ever write.

TS: Damn. Well, you should be so proud of that song. I feel like it punched me in the gut. It’s literally the coolest thing. I swear I’m not just saying this, but I feel like everything I’ve heard from the album feels really uniquely you. Like, there’s some like kooky stuff on there and then there’s like old stuff which is so good, and then the Pharrell stuff is so incredible.
AG: [Laughs] That’s so funny, you know me…

TS: Like “The Light Is Coming” is the kookiest song.
AG: It’s such a kooky song.

TS: And so are you! And I love that and I feel like I can feel that in the music. It’s like, I love albums where I can hear the artist’s perspective not only in the voice but… it’s just so unique. Like those ’90s chord progressions are so you in my head. Or like, “No Tears” to me, it’s a pop song with such perspective and again, not just vocally, but production-wise. it just really, really works, so well done.
AG: Yay! thank you.