Daniel Arsham Talks Working With Pharrell On ‘Rules Of The Game’

Though not a direct adaptation, the production on Rules Of The Game is a different beast entirely. is based on Luigi Pirandello’s 1921 absurdist play Six Characters in Search of an Author and combines Arsham’s explosive visuals and design with Pharrell’s music (as played by the Dallas Symphony Orchestra) and dancers choreographed by Bokaer. If it sounds like grueling work to get three distinct creative visions to work cohesively in one production, that’s because it was: “We’ve worked on this a very long time so we’ve had the time to experiment to see what might work and what won’t,” says Arsham.

Arsham notes that Pharrell created an entire demo album worth of music that was then edited down to be converted to an orchestra by composer David Campbell, and that getting his visuals to succinctly match Bokaer’s choreography were only some of the difficulties faced when putting the production together. He added that the team would be working on the project until it premieres (which as of now, it has). He was very happy with how the production was turning out. “Anyone who knows Pharrell’s work and music will identify this as Pharrell but at the same time it’s very different from pop music,” says Arsham.

Arsham first met Pharrell Williams when he went back to Miami after graduating Cooper Union. As he remembers it, he already considered Pharrell to be famous with The Neptunes already being a production team at the tip of the entire music industry’s tongue. But Pharrell wasn’t yet a household name, and a friendship and creative camaraderie started developing between the two. But it wasn’t until Arsham created molds of the Casio MT-50 keyboard that Williams began recording music with that an official collaborative relationship was born.

Pharrell Talks ‘Rules Of The Game’

How a Grammy-winning musician, a top choreographer and an esteemed scenic designer are making the ultimate power play in collaborating on ‘Rules Of The Game,’ a groundbreaking production that will debut at Dallas’ SOLUNA International Music & Arts Festival in May. It’s a Saturday in late winter, and Bokaer, a celebrated modern dancer and choreographer, is seated at a nondescript table in an airy workspace in Long Island City, Queens.

This was once a gallery home for dealer Jeffrey Deitch—artist Matthew Barney apparently does Matthew Barney things next door—and now it’s the studio of visual artist and scenic designer Daniel Arsham, Bokaer’s friend and frequent collaborator. Late-afternoon sun pours through a string of skylights. A small documentary crew huddles over a shot. And at another table, taking a break and eating a quick fast-food lunch, sits Bokaer’s and Arsham’s co-conspirator: Pharrell Williams.

At first glance, they seem an unlikely team: Bokaer, the eccentric dance visionary with Guggenheim and Ford Foundation grants; Arsham, the imaginative Miami-raised artist stretching boundaries of sculpture and design; and Williams, the Grammy-winning producer and singer perhaps best known for his ebullient anthem “Happy” and his role as a talent judge on NBC’s music reality show The Voice. But Williams, 43, and Arsham, 36, have known each other for a decade—not long ago, for an exhibition, Arsham made an astonishing replica of Williams’ childhood Casio keyboard from volcanic ash—and Arsham and Bokaer, 34, have been friends for nearly the same amount of time, having met as wunderkinds in the company of modern dance legend Merce Cunningham.

END_OF_DOCUMENT_TOKEN_TO_BE_REPLACED

Pharrell To Score ‘Rules Of The Game’ Due May 17th

By Jerry Portwood. Pharrell is collaborating with artist Daniel Arsham and choreographer Jonah Bokaer for a multidisciplinary production titled ‘Rules Of The Game‘. Williams and Arsham have teamed up once again for a new project that also includes a third creative talent, choreographer Jonah Bokaer, to craft a multidisciplinary performance, Rules Of The Game, that will incorporate dance, art and music.

The piece, which will have its world premiere May 17th at the second annual SOLUNA International Music & Arts Festival, includes an original score by Williams that will be performed live by the Dallas Symphony Orchestra and conducted by composer David Campbell, who has worked on over 450 gold and platinum albums, with artists including Adele, Beck, Jon Bon Jovi and Michael Jackson.

END_OF_DOCUMENT_TOKEN_TO_BE_REPLACED 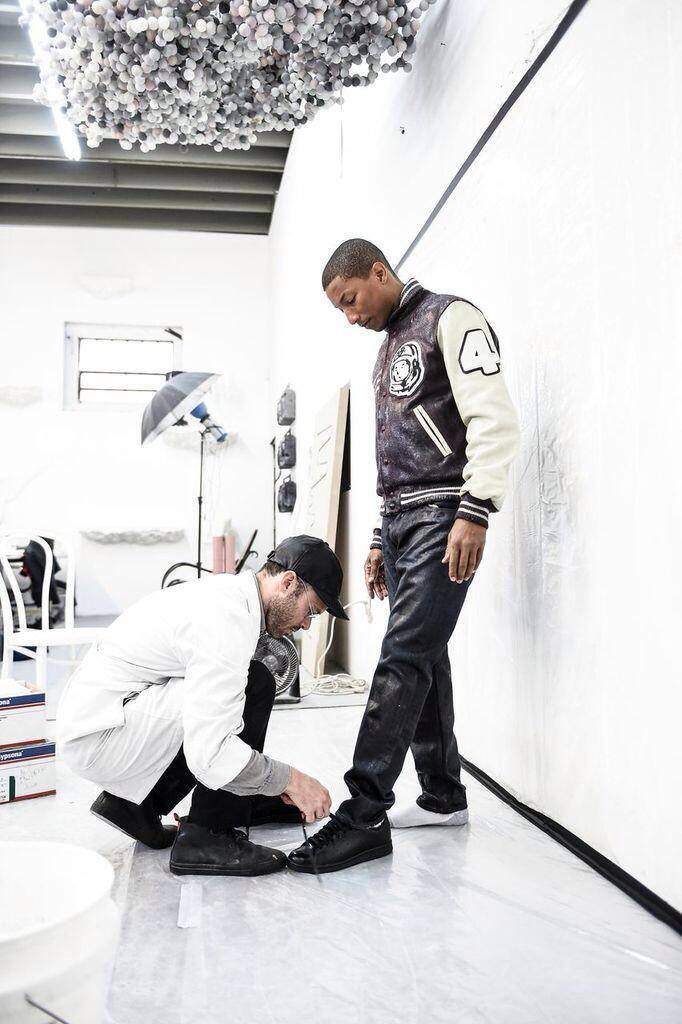 “@Pharrell is wearing specially treated clothing for the mold I made. See it in Paris on May 27” 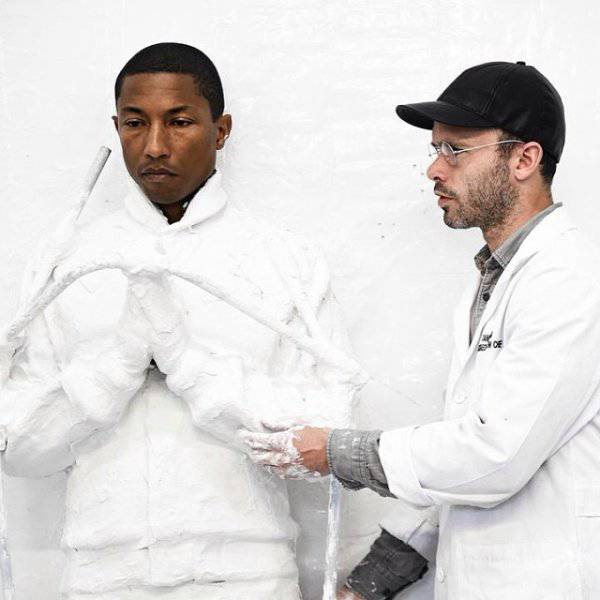 Pharrell Williams is swiftly moving toward total cultural domination. Is it any surprise, then, that the multi-hyphenated man of the moment has been chosen to inaugurate a new art space in Paris next month? The 41-year-old first met the gallerist Emmanuel Perrotin seven years ago in Miami, and together, Perrotin says, they have been on an art adventure ever since: “meeting artists and visiting studios, brainstorming all along those great moments of artistic synergies and true happiness and friendship.” 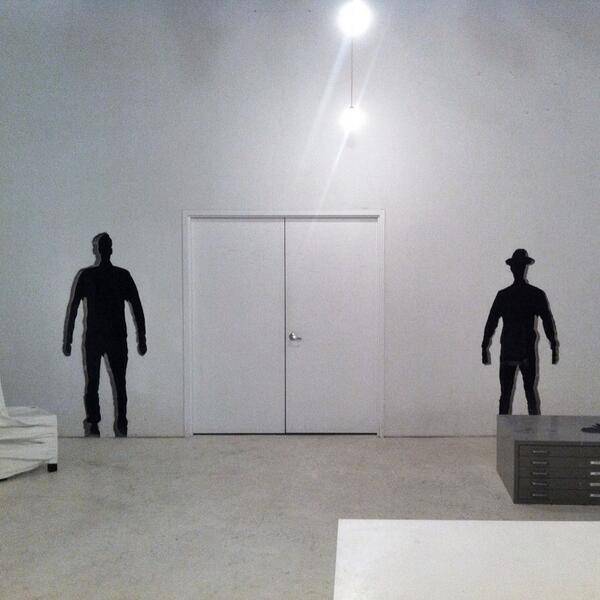 So it’s no surprise that Williams was present at the opening of Perrotin’s New York gallery late last year, where he treated Perrotin and friends to an early listen of his album “G I R L.” As one would expect, the tracks made Perrotin happy — a feeling he knew could transcend the record and fill his new art space, Salle De Bal, which opens on May 27 in a former ballroom in the 17th-century Hôtel Du Grand Veneur in the Marais. So he invited Pharrell to collaborate on the inaugural show, also called “G I R L.”

The roughly 40 works that will be on view, some curated and others commissioned, are a celebration of women — and love. And interestingly, more than one artwork focuses on Williams himself: Takashi Murakami painted a portrait of Williams dancing with his wife, Laurent Grasso illustrated a single (“Lost Queen”) from the “G I R L” album and Rob Pruitt took markers to a canvas loveseat, which centers around Williams’ head, topped with his signature Vivienne Westwood hat.

Some of these artists consider themselves friends of Williams, including the artist Brian Donnelly, better known as KAWS, who created an original work for the show and will also design the bottle for the musical icon’s forthcoming fragrance called, you guessed it, Girl. Here, a first look at some of these commissioned masterpieces, along with commentary from the artists about working with Williams. One thing becomes clear: the artist’s ability to inspire knows no bounds. 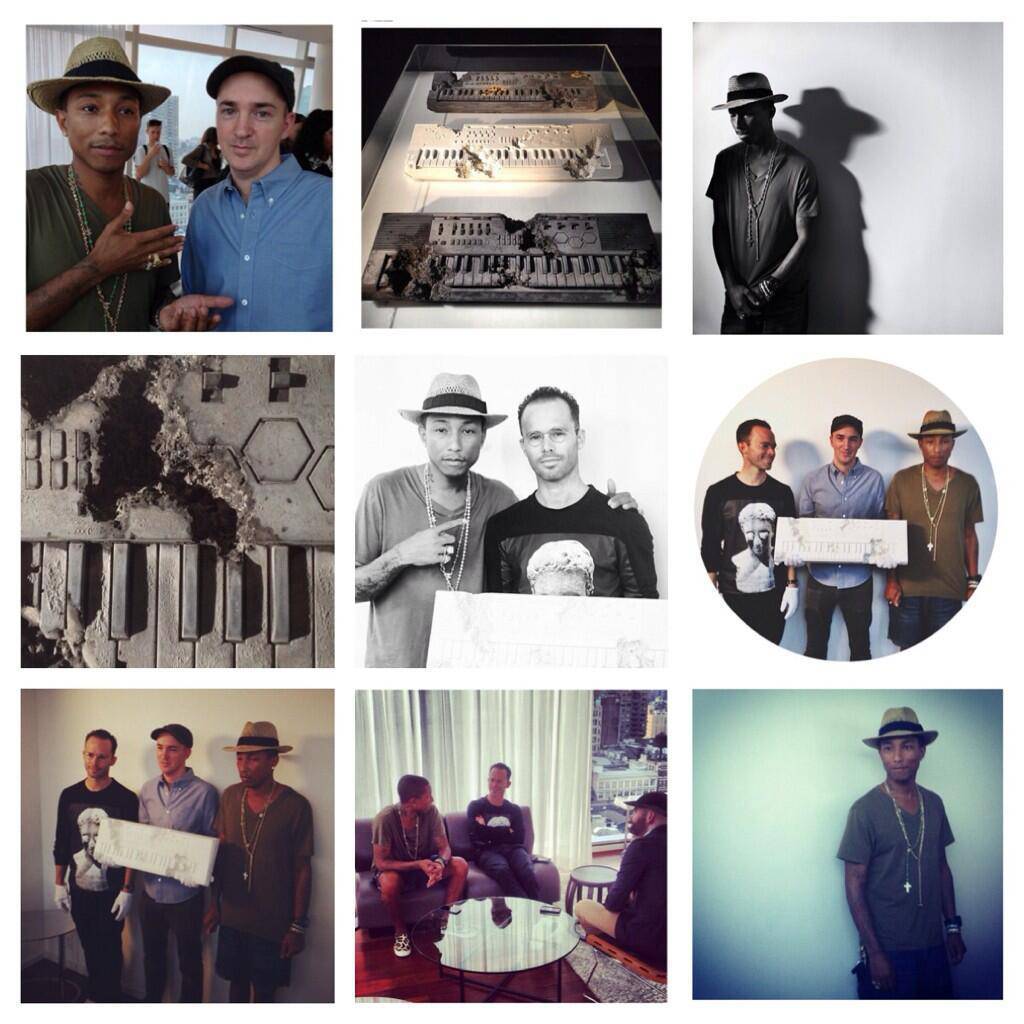 Besides being a preternaturally gifted songwriter, musician and producer, Pharrell Williams is one of the great collaborators of our time. Perhaps most famously, there’s his partnership with Chad Hugo as the Neptunes, the production duo that defined the sound of hip-hop and R&B in the late ’90s and early ’00s. He has also designed accessories for Louis Vuitton, created sculpture with Takashi Murakami and teamed with Nigo, the founder of A Bathing Ape, on several clothing lines. And of course Williams teamed up with other musicians on two of the biggest songs of the summer — “Get Lucky” with Daft Punk and “Blurred Lines” with Robin Thicke.

But perhaps his most personal collaboration of late is with the artist-architect Daniel Arsham, a fellow multihyphenate. Arsham is a master collaborator in his own right, who worked for many years with Merce Cunningham on stage designs and is partners with Alex Mustonen in the conceptual architecture practice Snarkitecture. Lately, he has been casting a variety of objects in volcanic ash and shattered glass, creating sculptures that look like archaeological relics from a distant future. His latest pieces are molds of the Casio keyboard on which Williams first began playing music. Last week, the duo sat down in Lower Manhattan to discuss the project.

Do you remember your first conversation A.?
ARSHAM: Emmanuelle Perrotin, who represents me in Paris, invited me to dinner at Pharrell’s house five or six years ago. I remember [turning to Williams] you had someone from your team bring up my Web site. We were in your kitchen. You were asking all kinds of questions about the work — what it was made out of, how it was physically made.
WILLIAMS: I don’t remember that moment that he’s referring to because that time in my life was a blur. My son was …
ARSHAM: Probably just born, right?
WILLIAMS: Yeah. It was a different time. But as long as I can remember, I’ve been impressed with him as a person, the way that he carries himself. And looking at his work I’ve always noticed a consistency, like a rhythm, a through line. And when I got to know him a little more, then you start to notice that there’s a connection between his work and him, what it is that he thinks and feels, and that’s when it just becomes magical. This guy sees a certain way in his head, and then he goes and he actually augments reality.

END_OF_DOCUMENT_TOKEN_TO_BE_REPLACED 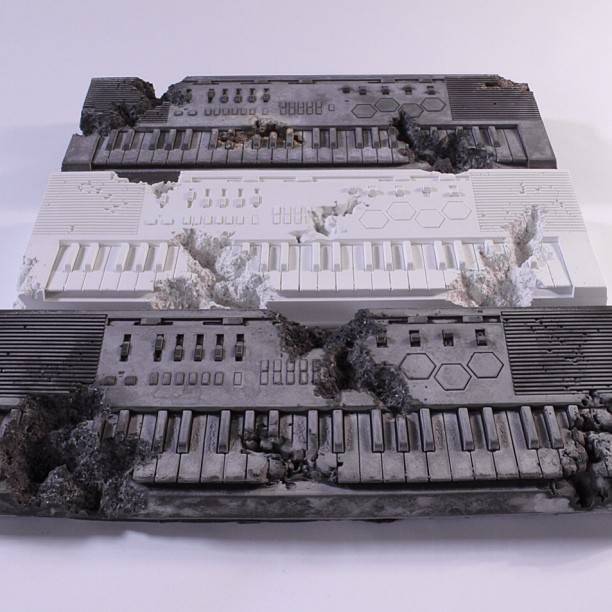 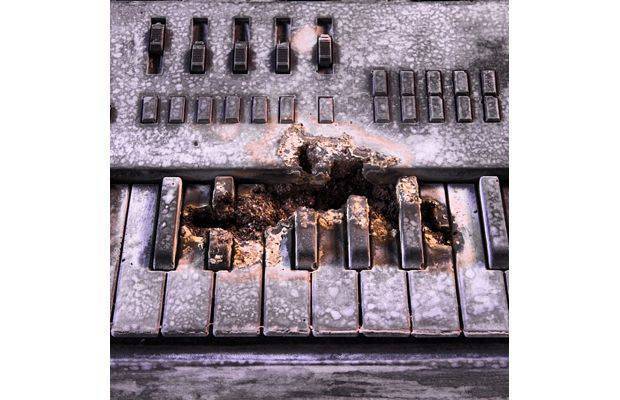 What do you get when you put together singer and fashion fan Pharrell Williams, artist Daniel Arsham, and a reconstituted keyboard and drum machine? On September 11, Arsham will unveil new artwork inspired by Pharrell’s instruments from the beginning of his musical career in the 1980s at the Standard, East Village. 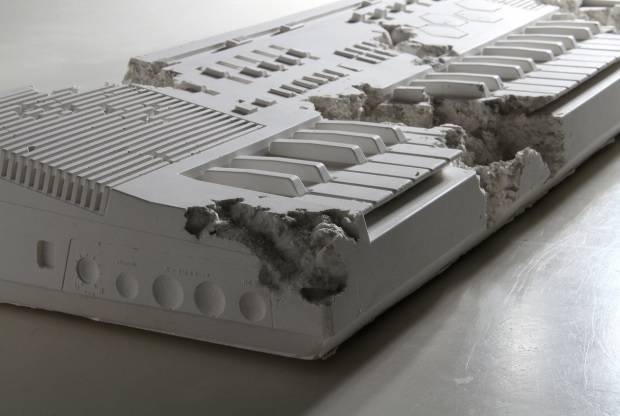 According to a press release, Arsham “has located, uncovered, and recast an original keyboard and drum machine in volcanic ash, rusted steel, crystal, and carbon dust” making each item look like “anthropological relics” just being discovered. This unique blend of art worlds will also feature an interactive component, with each viewer having the opportunity to touch the objects with gloves, thus becoming a part of the piece. 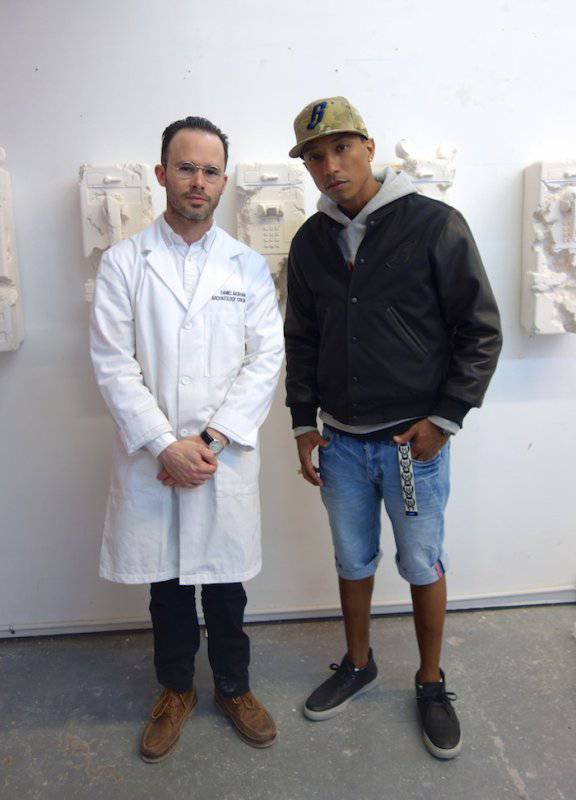