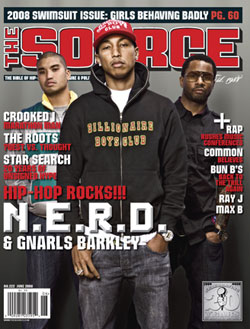 BallerStatus.com was leaked the cover of their upcoming June Issue. One of them at least. It’s a dual cover — one cover featuring eclectic duo Gnarls Barkley, which was leaked to Bossip earlier this week, and the other is of the Pharrell-led trio known as N¤E¤R¤D who is prepping a new album titled Seeing Sounds. In the magazine’s cover story, Pharrell talks about several things, such as the new music, his inspirations, and what inspires the average hip-hop head. “The average hip-hop head is inspired by different things too, which is a huge issue I have.

We allow media to think we’re for us, by us and only us and that’s not true,” the super producer tells The Source. “The average hip-hop head watches ‘The Sopranos,’ ‘The Price Is Right’ and ‘SpongeBob SquarePants.’ None of these have any hip-hop innuendos. We’re human beings, capable of being entertained and inspired by many different things. That’s one of the things I fight for.” In addition to cover stories with N¤E¤R¤D and Gnarls Barkley, The magazine’s June issue is expected to hit newsstands in the coming weeks.
*ballerstatus.com