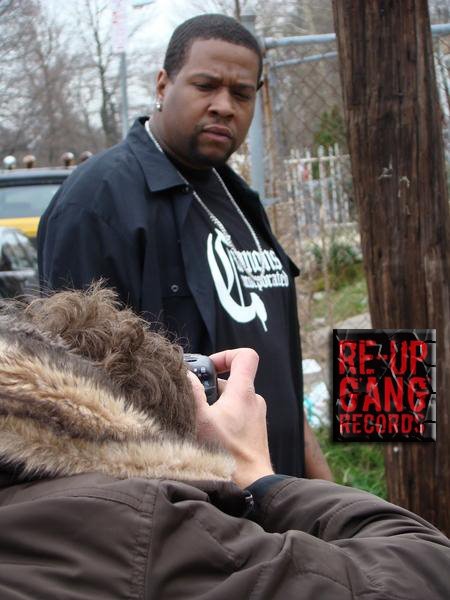 “I’m not signed to Re-Up Gang Records anymore. I asked for release—make sure it says that—I asked for a release, nobody dropped me. So put free agent in there,” says Sandman, the baritone voiced MC you may have heard of. And just like that, the Re-Up Gang, as we have known it, is no more. Well, while the Clipse (Malice, Pusha-T) and Ab-Liva press on, Sandman’s menacing mic antics will no longer be riding shotgun. After three critically acclaimed We Got It 4 Cheap mixtapes, the Philadelphia repping MC has decided to move on, citing uncertainty surrounding the team’s direction and too flexible release dates. It was only in March 2008, that Sandman was telling AllHipHop, “I’m happy where I’m at as far as Re-Up Gang records,” shortly after Re-Up announced a joint venture with Columbia Records at the top of ’08. According to Sandman, the proper Re-Up Gang album was supposed to be released on June 9th. “Obviously that date has been revoked and now the Clipse have a date for the top of ’09,” says Sandman. “There’s nothing else left in that pipeline there was no discussions to have, it was just like alright that’s that.”

Then there is the case of the critically maligned Clipse Presents… Re-Up Gang album released on August 5, 2008 via Koch Records. According to Sandman the project was never supposed to be part of the group’s equation, as far as he knew. While the lyrics have never been a question from the four man squad, the album’s beats were lackluster, with a number of songs being “remixed” cuts from the We Got It 4 Cheap Vol. 3 mixtape. Sandman notes that he was just as confused as the fans. “I was told by Pusha that we was gon’ license the beats for We Got It 4 Cheap Vol. 3 and simply put that in the stores, shoot a video for ‘20K [Money Making Brothers on a Corner]’ and ‘Show You How To Hustle,’” says Sandman. “We went around promoting “20K Brothers” as our first single. Out of no f***in’ where comes this ‘Fast Life’ record.” For those keeping up, the Scott Storch produced “Fast Life” was the lead single for the Clipse Presents Re-Up Gang album, but the song only featured Pusha-T and Malice.

“I’m a hundred thousand percent for the Clipse building they song library,” stresses Sandman. “Music, that’s the platform so we all gotta keep doing it and I believe in that.” However, he continues, “I don’t think that a Clipse song should have been the lead for a Re-Up Gang album because it’s Re-Up Gang. Second of all, I think if they were gonna do a song, at least stay in the vein and the realm of Re-Up because ‘Fast Life’ is not Re-Up Gang music, [there] was no content of that nature on any of our We Got It 4 Cheaps.” Sandman continues, “If the beats was licensed we would have had the beats we rapped to [on We Got It 4 Cheap, Vol 3], so I don’t know what the case was man, I can’t even answer that. I looked up in the Internet and saw what you guys got. Not only was the beats wack, but who the f**k was listening to it when it came down to mix and master this b***h because one of them songs are totally off beat, totally.”

The brother who said he was “coldhearted, I could freeze velour” on “What’s Up” from We Got It 4 Cheap, Vol. 2 asserts he holds no ill will towards Malice and Pusha. But he does lament the fact that Re-Up isn’t going to see the years of hard work put in come to proper fruition. “Re-Up Gang as a foursome had the biggest buzz since N.W.A.,” says Sandman matter-of-factly. “That was the last time four n***as got together and got what we got, critically acclaimed this that and the third, Rolling Stone interviews, come on. It has a cult like following, so now what happens to that?”Right now Sandman is re-focusing on his C.A.N.N.O.N.S. Inc., though thanks to his omnipresent “Yeah, Cannons!” ad lib it’s not like he ever let it slip to the wayside. The roster of artists is deep (HouseWife, Lil’ Spazz, Lo’ Pro, Kawshen, Wild Bill, Eddie Somerset, Teflon, Chris Bugz, Cheech Myers, Rush and Filthy Rich.) and after dropping a mixtape, Philadelphia Ego, a few months back, Sandman just released the resounding street album Gianormous.

More in line with the vibe of the We Got It 4 Cheap series, Gianormous is stacked with impeccable lyricism matched with thumping beats. “Gianormous is me picking up where I left off,” says Sandman. “When Pusha met me he had four of my CDs, they all read ‘Cannons Inc.’ This situation definitely tells me, ‘Hello, gotta get on your horse and gallop.’ That’s not hard ’cause motherf***ers like dope music and I got plenty of that.” The album’s tracks, including lead single “Anchor,” are crafted by up and coming beatmakers including Bionik (“Rockin & Rollin’”), School of Velocity (“Anchor”) and The Boogiemen. It was all to plan. “That’s the only way you change the game,” explains Sandman. “If I come out and get a hook from T-Pain and a beat from whoever the f**k is poppin’ I just did what the last 20 people just did. If I come with five, six n****s you never heard of but they bringing that work, I got a whole new conversation in Hip-Hop started.”

A topic of discussion will inevitably be, What do the Clipse think? When asked for comment the VA brothers provided the following statement attributed to Re-Up Gang Records: “We wish him well and know his talents will be recognized by the masses just as we recognized them when we met…all the best!!!” Sandman also made sure to note his relationship with Ab-Liva is still solid. “Ab-Liva been my n***a before we even knew the Clipse, so you know that ain’t gon’ never change.” The hustle—moving the lyrics and beats like weight—isn’t changing either. Right now Sandman is looking for distribution [“I’m thinking about Allen Grunblatt. I’m waiting on a phone call from Steve Rifkind,”]. Sandman’s pitch sounds good. “I’m a free agent and I’m a boss, I shoot my own videos, I got my own Web site, I got my own crew, I made my own name, I got my own beatmen, like what the f**k do you want, what’s left? I’m self-contained.” It’s hard to doubt Sandcannon won’t eventually get his own re-up.
*allhiphop.com