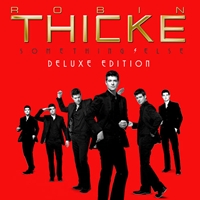 3 Of 5 Stars
At a time when most R&B Casanovas, taking their cues from rappers, are thuggish egomaniacs — or, in the case of R. Kelly, just plain freaky — Robin Thicke offers a vanilla alternative. (No pun intended.) His largely self-produced third album picks up where his big 2007 hit “Lost Without U” left off, with Thicke cooing in an airy falsetto that holds promises of honesty, fidelity and long nights in the boudoir focused solely on Her Pleasure. The music is a lush, louche swirl of strings, congas and Fender Rhodes that flaunts its debts to Marvin Gaye (“You’re My Baby“), classic disco (“Something Else“) and Philly soul (“Magic“). As a utilitarian background soundtrack, it’ll do nicely — lots of babies will be made to ballads like “Cry No More.” But Thicke’s songwriting teeters into self-parody, and his mixed metaphors — “We’re just spaceships in the night/Ripping the clothes off of the past/Making a new path” — could break the mood of the randiest couples.