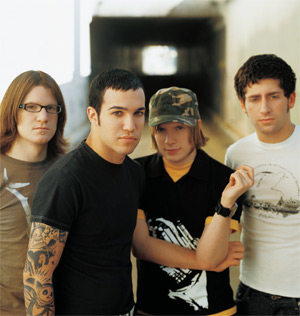 It’s been bumped from an original release on November 4 to December 16 — not, apparently, to accommodate Wentz’s bonding time with his firstborn but because the deliberate clash with US election day was deemed twee in hindsight. ‘‘I perceived it as a gimmick, a cute thing,” Wentz says. ‘‘We were going to make ‘Vote for Fall Out Boy’ T-shirts. But that seemed a bit cheap. So we decided to push it back. Our label wanted it out next year, we wanted it out this year, so now it’s out two weeks before Christmas. We’ll see how it goes. The election is more important than our record. If our record suffers for that, that’s OK.” The move has caused huge drama in Fall Out Boy land, upsetting eager fans and messing with their record company’s lucrative pre-Christmas release schedule.

Lil’ Wayne isn’t the only hip hop identity on Folie. Rumoured guest Kanye West was too busy working on his new record but the band have written and produced a song W.A.M.S. with Pharrell Williams. ‘‘High school and celebrity are not that far removed,” Wentz explains. ‘‘The uncool kids are still uncool and Pharrell is one of those people who can make the uncool so cool it’s unbelievable. He did that. He’s a like-minded soul. It’s definitely a Fall Out Boy song with that Pharrell spice on it.” Wentz says Fall Out Boy learnt a lot from the way Williams rolls. ‘‘For starters you don’t have to get up at 10am to start working. Pharrell thinks outside the box. It’s not white, it’s not black, it’s not hip hop, it’s not rock. It’s this world he has created for himself. He’s a tastemaker, the frontman of this snowball of ideas.” They wrote their song while watching Barack Obama’s speech at the Democratic National Convention in August. ‘‘You can’t beat that,” Wentz says. ‘‘It was strange watching Pharrell watching the speech. One day I’ll tell my grandkids about this. Maybe.”