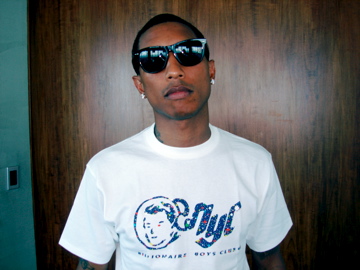 As Microsoft’s take-that-Apple “I’m a PC” campaign rolls on, an ad featuring Pharrell Williams was released on YouTube and already has over 650,000 views. Whether or not Williams is really a Mac guy, the ad has that dorm-room-philosophy appeal some people just know how to pull off, even when not high. “It’s just the illuuuusion that things are solid,” Pharrell informs us, before explaining Einstein’s idea that “energy can’t be created or destroyed.” So, “no one ever really dies” — that’s where he got the band name N¤E¤R¤D from. Assuming anyone’s going to start associating Williams with PCs rather than Macs at this point, you can see why he’s an inspired choice for this Crispin Porter + Bogusky campaign, which is trying to recast the dowdy PC image as futuristic, and global in a proudly nerdy way. Still, that smart move makes you wonder all over again how on earth anyone thought paying piles of money to Jerry Seinfeld, star of the much-maligned first two ads in the series, was a good idea to get the campaign rolling. There may be no human being more diametrically opposed to the whiter-than-white, intellectually uncurious, complacent Seinfeld than Pharrell Williams.

Still, as suave as Williams is, in the video it looks like a leap to connect his world view to PC’s. But he tries, and maybe that’s enough to get the campaign some momentum. So what if it’s a bit abrupt to go from talking about how we’re on the brink of a major cosmic breakthrough, to asking, “What possibility lies beyond the on button for your computer?” (Some days, mainly just endless e-mail, IMs, and work I can’t catch up with, but ‘preciate the sentiment!) In the same semi-mystical, pop-futurism vein, Microsoft posted a similar ad last week featuring Deepak Chopra sitting in his study. Chopra’s of the opinion that computers are going to bring about “global healing.” That video only has 3,000 views, for some crazy reason. Actually, the two videos point toward a promising direction for Microsoft to go: tech evangelism with a slightly spiritual undertone. Apple’s cool, sleek, no-nonsense image has nothing soulful about it, so that’s open territory as Microsoft tries to build its own new image.
*latimes.com