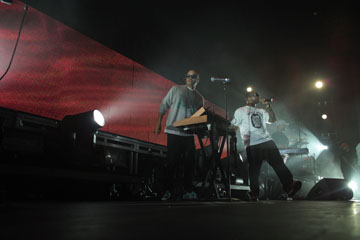 “Give me some of your tots!” Superstar producer/rapper/singer Pharrell Williams is one half of The Neptunes, best friends for life with Kanye, Snoop and JT, and a big part of why music today sounds the way it does. But that can’t stop his show from having technical difficulties that keep him offstage. So obviously, Pharrell entertains an audience waiting for him in the dark by quoting Napoleon Dynamite. Technical issues finally sorted out, the N¤E¤R¤D front man, with Chad Hugo, a live band and two full drum sets, set loose the full funkiness of his lithe, awkward frame and released alternately silky, spastic and stoned vocals. The set started with the fuzz-and-shout-mantra thrasher “Anti-Matter” off of N¤E¤R¤D’s latest album, Seeing Sounds. The band was, by turns, tight and loose in all the right places, and the mixed bag of hipsters and Real Hip-Hoppers took to it warmly. But Pharrell, a sort of lizard-prince/cheerleader, demanded the crowd get crazier.

While Williams and Hugo may have full faith in their hip-hop/funk/metal fusion, the folks there to see the Backpack friendly Common seemed a little unsure about Pharrell, with his over-sized glasses and American Apparel clad acolytes. It’s hard to say whether the band helped or hurt their cause by taking about three minutes out of the show to hand pick ladies from the crowd to join them on stage. Happily, all disparate feelings about N¤E¤R¤D disappeared when the audience felt the bouncing bass and insistent horns of their hit “Everybody Nose.” Audience members throwing Star Trak symbols in the air to honest-to-goodness body movers like “Spaz“, “You Know What” and “She Wants To Move“. By the end of their action packed, crowd-surfing, sweaty set even the stodgiest back-packer must have been convinced. Common, perhaps influenced by Kanye West’s scripted Glow In The Dark Tour, flecked his set with dialogue roughly revolving around him trying to pick up ladies at a bar. This was not particularly credible, nor particularly welcome from a man whose current revered status comes from his earnestness, insight and romanticism.

Previewing a few tracks off his forthcoming album, Common tried to showcase a younger, more vibrant sound, with sing-along friendly choruses and shiny neon beats. Common’s slowish, deliberate flow has a majesty that fits his usual introspection but can make a come-on sound awkward. Unlike Pharrell, Common can’t ask how many girls in the audience like giving brain. Instead, talking to the actors portraying the bar on stage, he dropped bon mots like “I’ll have the sangria. The ladies can have whatever they like.” Oh Common, you sangria drinking fool; don’t you see you’re too sensitive to be slick? Performing a full five tracks off his seminal Be, Common absolutely dazzled. His re-vamped version of “Testify” was a massive, nuclear force that had the assembled bros jumping and raising their hands to the sky. Common poured old favourites like “The Light” over a devoted and adoring crowd and by the time he was done had taken off his cumbersome leather hipster jacket revealing a simple t-shirt, drenched with sweat. And that’s how the crowd liked him best.
*thestrand.ca