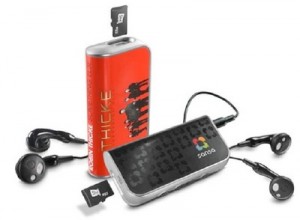 The new slot music players, which we wrote about recently, are apparently for those people who find downloading music too difficult, or just don’t won’t to be bothered. SanDisk which makes the Sansa SlotMusic player, is betting on this new format, as are some major record companies. Here’s how they explain it on their site: Down with downloads. Up with the new Sansa SlotMusic player. The player that cuts out the middleman, and lets you get straight to the music.slotmusic is a versatile new physical music format for the 21st Century. Each slotmusic card contains a full album of music, and you can add files of up to the 1GB card capacity.

Made to also work with microSD enabled phones or computers, each slotmusic card cost $14.99 , and there’s the option of buying an artist-branded player, ie the Robin Thicke one pictured above. (The player itself only costs $19.99 and the shells are interchangeable.) For launch last week, there was 35 artists announced who will have their albums on slotmusic cards in Best Buys’ and Walmarts by the end of October but they expect that number to grow by Christmas. (The list is very, huh, diverse…bands such as Five Finger Death Punch, to ABBA’s Greatest Hits and Coldplay.) I’m not one of the converts however — I love downloading my own music and making playlists — but maybe there is a market out there for people who will embrace this new music format.
*popgadget.net