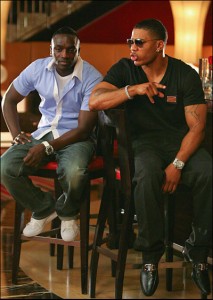 Nelly has revealed talks are taking place to form a “supergroup” made up of him and three other hip-hop stars. The rapper told MTV: “Me, Akon, T-Pain and Pharrell are talking about doing a project. We got a host of things we’re trying to do.” The 33-year-old said the group would strive to “make a mark”. “I don’t think you try to put things together with people you don’t think you can accomplish [them] with. With ‘Kon, with Pain and Pharrell, I know it’s more about the music than anything,” he said. “It’s about leaving something. I think we’re all okay as far as the money thing goes. I don’t think anybody is hurting. You wanna do things you can be remembered by. Make a mark. I think that’s something that’s foremost on all our minds.” Nelly, who released his latest LP Brass Knuckles last month, recently spoke about organising unexpected collaborations in a move to promote the hip-hop genre by “branching out”. Oh God let this be just a rumour… *prays*
*digitalspy.co.uk