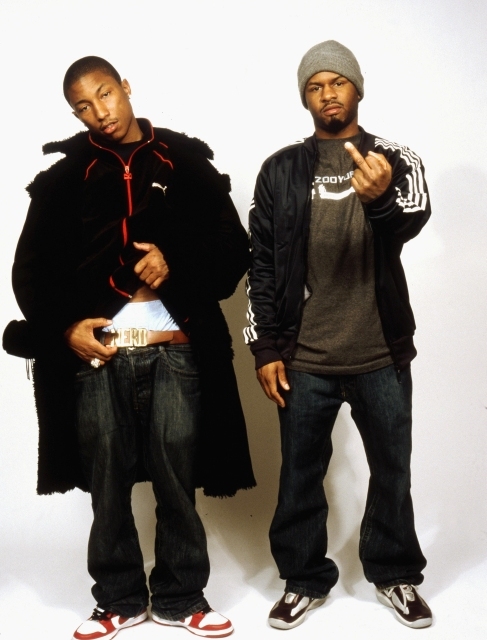 For a man who’s partially responsible for many of the biggest hip-hop, R&B and pop hits of the past 10 years, Pharrell Williams certainly doesn’t have a lot to say. The 35-year-old producer/artist/unstoppable musical force is on the phone from a Vancouver hotel room, resting before he and longtime pal Shae Haley, whose age he claims to have forgotten (“I honestly forgot, to be honest. I’m not even [expletive] you.”) hit the stage as N¤E¤R¤D (No one Ever Really Dies). There’s a third man missing from this Virginia-bred outfit: Chad Hugo. Of course, Hugo and Williams are more regularly known as the dynamic production duo The Neptunes. However, the more introverted Hugo chose to sit out the band’s touring schedule. “You know, he’s more of a family man,” Haley explains. Vancouver is just one stop on a tour that has Williams and Haley sharing the bill with hip-hop star Common, whose upcoming album “Universal Mind Control” (slated for a November release), is mostly produced by The Neptunes. “It’s fun,” Williams says on hitting the road with the conscious Chicago MC. “We’re having a ball.”

Williams and Haley are keeping their words to a minimum on this day. Call it fatigue. Call it malaise. Call it a sense of utter, vainglorious, rock-star indifference. But both men don’t seem to be in the mood to explain the musical aesthetic of their band. Maybe it’s because they’re tired of having to explain just what the heck their band is. Is it a rock band? A hip-hop band? An R&B band? “It’s just alternative music to us,” Williams says. N¤E¤R¤D’s first album, “In Search Of …” was released in 2001, a year later than scheduled. The trio went back and added a backup band when they weren’t satisfied with the original version, which sounded more Neptunes than N¤E¤R¤D. Adding live instruments may have given the album the energy and emotion it needed, but it didn’t make record retailers’ lives easier. Many a store didn’t know where to put the unclassifiable release. “Just put it in the front of the store,” says Haley.

“That’ll eliminate any kind of confusion.”While their 2004 follow-up “Fly Or Die” seemed to be a more grounded rock album, their latest release, “Seeing Sounds,” once again has the men doing their best to be as difficult to categorize as possible. Rock, Rap, R&B, even Industrial Dance music ends up in the N¤E¤R¤D stew. They also continue in their tradition of dispensing cheeky snarkiness in their lyrics, shown in their single “Everyone Nose.” “It’s just a satire,” Williams says about the band’s ode to coked-up club girls. “It’s just making fun of the club life.” The guys certainly bring the message home in the video, which includes a cameo by none other than Lindsay Lohan. Says Williams, “Sam [Ronson, Lohan’s speculated girlfriend] just brought her out, to hang out. She just hopped in the video with us. It was fun.” Williams insists that, despite N¤E¤R¤D’s smart-alecky hipster rep, the band members do take their music seriously. “Yes, there’s a cheekiness to it,” he says. “But, I mean, you know, it’s not like we’re sitting around going, ‘How cheeky can we be?’

We’re just writing about things that, you know, we feel. Very basic in nature, but obvious.” The basic-but-obvious sound of N¤E¤R¤D isn’t the only thing Williams wants to see get proper exposure. There’s also the stable of young artists on Williams and Hugo’s Star Trak label. While the label has previously dropped releases from Kelis, the Clipse, Snoop Dogg and Williams himself, Williams says the label is concentrating on up-and-comers like the equally unclassifiable vocalist Kenna, Harvard-educated pop-rock duo Chester French and prized possession Robin Thicke, whose new album, “Something Else,” hit stores this week. So, while Thicke does his R&B thing on tour with Mary J. Blige, Williams and his N¤E¤R¤D faction will continue to tour with Common and look for more geek love from audiences. “More than anything, we just appreciate, you know, all the support,” says Williams. “Like I said, the audience of the band is growing by the day. It’s really crazy. And it’s an incredible experience. And I don’t know. Buy a copy of the album for everybody in the family. Put it under their tree.” Adds Haley, “Please.”
*newsobserver.com