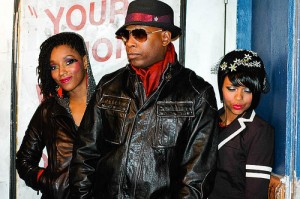 Idle Warship (Brooklyn emcee Talib Kweli, Philadelphia singer Res (Shareese Renèe Ballard) and the new member Canadian singer Krista Gonzales aka Graph Nobel) are currently recording their debut album, Party Robot, which is tentatively planned for a 2009 release. They just released their debut single ‘Black Snake Moan’ on their myspace page and there are rumours that The Neptunes have worked with Idle Warship, so I checked heard ‘Black Snake Moan’ and it does sound like a Neptunes Track a bit. Could this be a Neptunes Track, what y’all think.