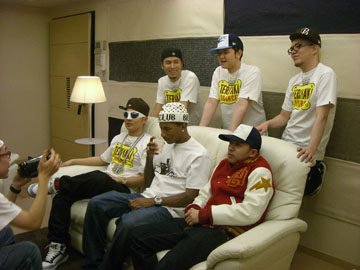 Teriyaki Boyz (Ilmari, Ryo-Z, Verbal, Wise & Nigo the Founder & DJ of the group) are working on a new album titled ‘Serious Japanese’ due January 29th.  The album will be also available with a DVD on the Limited Edition. They already confirmed their first single called ‘Work That feat. Pharrell’ produced by The Neptunes which is due January 14th available. Their debut album from Def Jam Recordings and (B)APE Sounds titled ‘Beef Or Chicken’ was produced by an array of rap and electronica producers including Adrock of the Beastie Boys, Cornelius, Cut Chemist, Daft Punk, Dan The Automator, DJ Premier, DJ Shadow, Just Blaze, Mark Ronson, and The Neptunes.
Thanks To Neosoul