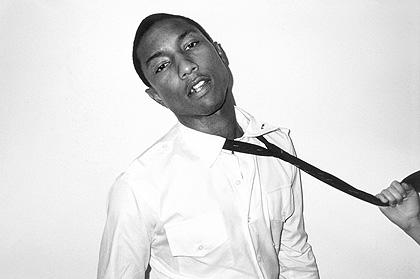 The 35-year-old musician and rapper from Virginia has, as half of The Neptunes, produced avant-garde beats, bespoke bass lines and 24-carat melodies for Madonna, Justin Timberlake, Jay-Z and Britney Spears. He also plays in his own band, N¤E¤R¤D He is a recent celebrity addition to the F1 Circuit thanks to a chance meeting with Lewis Hamilton.

Which sport is most important to you?
The first sport I got into – and the one that has had most impact on my life – is skateboarding. Most people think skateboarding is for some kid with blond hair from suburbia. But I remember when I was 12 or 13, growing up in Virginia Beach, everybody, black and white, was doing it. Skating taught me what it meant to be cool, to have credibility. I had it. I got so mad with it that I had a half-pipe put in my house. I had the look – the baggy jeans, the Vans. I still wear Vans shoes. I rap about skateboarding. My nickname is Skateboard P.

Do you still skate?
I’m always on the road, so I don’t do it as much as I’d like, but my brother, Cato, is a pro-am skater and I co-sponsor a team with Reebok, the Ice Cream Skate Team, named after one of my fashion labels. It’s my way of keeping in touch. I send the kids around the world. I put money in their pockets. I’m trying to help spread the culture. You know, to tell kids: ‘You can do a trick on a skateboard and be cool and earn money. The chicks will love you like you’re buying dope.’

Are there similarities between sport and music?
Sport teaches you discipline and execution. That’s what’s required in music. I could see that when I was at high school in Virginia. I played sports but I was also in the marching band that used to perform at [American] football games. I was 16 and I played snare drum and Chad [Hugo – Williams’s production partner] was the conductor. We used to win awards because we were so tight. Sportsmen and musicians are also leaders – not in a ‘Follow me’ way but in an individualistic way. Look at David Beckham. In how he plays, in how he dresses, he has the mentality of an individual.

What sports do you watch?
I’m beginning to get into motorsport. I’ve always loved cars. I have a Ferrari Enzo and a McLaren Mercedes SLR, and I have had three Rolls-Royce Phantoms and a Phantom Drophead Coupé – which are all fast rides. I went to the American Grand Prix in Indianapolis last year and I met Lewis Hamilton. He’s a cool kid. He taught me a lot of things about the sport and we’ve kind of become friends.

Apparently Hamilton asked you to race with him in an F1 car…
We were talking about cars. I said you have to be in a race-car mood to drive the Ferrari Enzo. It’s so fast, it’s like being in a spaceship or a stealth bomber and there’s no radio, so I can’t have any tunes. I told him my dream car is the Bugatti Veyron. That top speed – more than 200mph – is something special. So, he asked me if I wanted to race in F1 with him. I told him I like speed but I don’t need to go that fast. It’s cool to watch.

Do you train?
There’s a ridiculous amount of energy on stage and, since we’re touring right now, that’s my work-out. Otherwise, I just try to stay off the Pop Tarts, the Mentos and the Gummy Bears. Shay [N.E.R.D’s drummer] tries to get me on the bike for 40 minutes a day, but it never works. Anyway, I see him sneaking off to McDonald’s, so I can’t take it seriously.

How has sport influenced the designs you create for your fashion labels?
Sportswear and hip-hop have always been linked. As a kid, I wore bad T-shirts and plaid pants. I admired Rakim. He was the best rapper and, stylistically, he was about classic sneakers and customised Dapper Dan threads. Billionaire Boys Club [Williams’ upscale label] has some of those influences. Plus, rappers and sportsmen have always appreciated jewellery.

You seem to like preppy golf chic.
Yeah. Golf is where sport and fashion come together in a more laid-back style. I’ve got a custom-made golf bag by Hermès.

What sport have you learnt to play in Britain?
Ping pong. That’s some goofy shit.