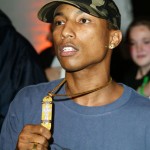 Apparently the convention bucking and lite anarchy that I wrote about at the N¤E¤R¤D show Thursday wasn’t all an act. Sources tell us that the reason that the group was late to take the stage — we didn’t notice because aren’t groups always late taking the stage? — was because there were two little kids from the Make A Wish Foundation backstage, whose wish was to meet Pharrell. Not only did he grant that wish, but he invited the kids to come on stage with him as the group performed. Apparently, according to our peeps backstage, folks at the Convention Center said no. Pharrell balked and refused to go on. A back and forth ensued. Pharrell, we hear, was told that he’d have to pay $5,000 for every extra person on stage.”And?”  (Not sure he said that exactly, but that was the essential oil of it.) And with that, P brought the tots on stage and started the show. You know that must have been a very, very special night for those children; certainly a night they will never forget. Class. Kindness. Grace. Harvesting good karma. Bravo, Pharrell.