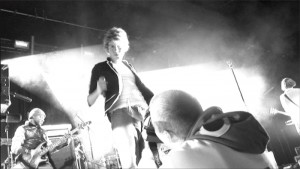 Chester French’s D.A. Wallach and Maxwell Drummey, who wowed crowds at the South by Southwest festival earlier this year, may have seemed like the odd men out among these hip-hop acts, but the Pharrell-endorsed former Harvard students made the most of their opportunity. “As a new artist, a lot of the time you’re approached to do things with different companies, and we always are much more attracted to any opportunities where you actually can expose your music to people,” said frontman Wallach. The group had the crowd captivated and dancing along. The preppy, curly-haired Wallach bounced across the stage, shaking a tambourine, clapping his hands and serenading young ladies onstage as he thrust his hips. Despite having released just one EP, She Loves Everybody, French showed why they were sought out by — ironically enough — hip-hop producers, including Pharrell and Kanye West. While they eventually chose to sign with Williams’ Star Trak label, they were more concerned at the moment with winning people over. “When you come through to a city, as an opener, you almost feel uncomfortable asking people to shell out 30 bucks to come see you, because we haven’t even put out an album yet,” Wallach said. “Tonight’s a great chance, because people were able to come see us for free.”