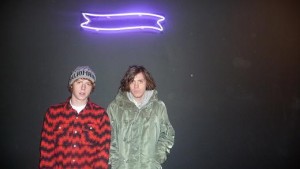 Our Good Friend and a big Chester French Fan Tylr from the forum got the chance to Interview Chester French last week, instead of to study for his math final. This is a interview, nothing special. No inside scoops or anything, just some Questions Tylr wanted to ask Chester French… Here is the interview.

Do you know what CF stands for?
1. A hip pair of a harvard graduates who making bumping tracks.
2. A chillin’ sculptor who made the Lincoln Memorial.

Chester French is like Vampire Weekends party animal cousin. Crushing empty beer cans on their heads and hitting the gym is what they do when they’re not with your mom. Wouldn’t you agree?
DA: We definitely like pumping iron.
Max: We’re more like Vampire Weekend’s pederast uncle.

What phrase would describe this album best?
DA: Best album of 2009 – most creative debut in years.
Max: Touch my tooter. Smoocher.

Best gig ever so far.
DA: Detroit Michigan on the Common tour was awesome.
Max:  I took my shirt off at an LA show. It was liberating.

Why don’t you guys do a tour of Canada?
DA: We’ll be coming through Canada on several dates of the Lady Gaga
tour this March-April.
Max: Xenophobia has prevented us from going to this point.  Or
patriotism. You pick.

Have you got any of those crazy fans yet?
DA: We have a few.
Max: They’re nice people.

Any of them profess their intentions to have you’re babies?
DA: As of yet, no.

Dance’ is a sick song. How did you go about making it?
DA: We made that song our freshman year when we were a full five-piece
band. Max and I wrote the basic song in his dorm. I remember singing
the chorus melody in his huge wheelchair-equipped shower for about 30
minutes till we had the right one. It’s not going to be on our album.

Do you’re parents enjoy your music as much as mine? You’re music is almost universal.
DA: Our parents claim to enjoy our music but secretly hate us for
wasting the very expensive degrees that they financed.