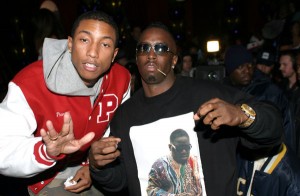 “It’s a profound love story, man,” Sean Combs told MTV News Wednesday night via phone from L.A. “It’s about this tumultuous love roller-coaster relationship that occurs. It’s everything from love, pain, sex, God, celebration. It’s a lot of things rolled into one. It’s a conceptual album. “One of the things I wanna give you that’s not out there yet is that it’s not me as a solo artist,” Diddy added. “It’s a group I put together; myself and two girls. Two young ladies, you may know them or you may not. It’s almost like some back-in-the-day Loose Ends-type sh–. We’re going to be telling the story of Last Train To Paris.”

“A movie is going to be shot to it too,” Diddy said. “It’s definitely going to be an album you can seamlessly see. Not after the fact. When you get the album on that day, September 22, you will be able to see the whole album on your computer. I go into production of the movie in May. Pharrell Williams also talked to MTV News about the project on Wednesday. “I thought it was sick,” he said of Diddy’s concept. “I think he’s a super-smart guy who knows where things are going. He told me, ‘Yo, just make me sick beats. I want them to dance; I want them to have a good time.’ … I was like, ‘Wow.’ For me, it was like making music for a movie.”