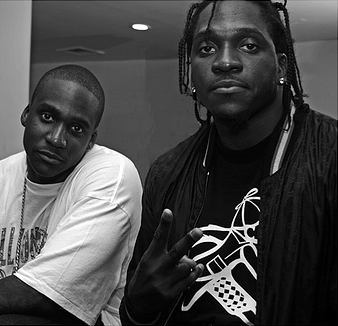 Rumors recently hit the net that Kanye West has kept a song he did with Clipse for their upcoming Columbia debut, for himself. XXLMag.com chopped it up with Pusha T. to find out if there is any truth behind gossip. As previously reported, the song, titled “Kinda Like A Big Deal” which was produced by DJ Khalil, was supposed to be premiering last Monday (March 9). When it was never released rumors spread that Ye jacked the track to use as a theme song for his new Nike kicks, the Air Yeezys. “That’s totally false,” Pusha told XXLMag.com. “I mean I don’t even know what to say. I don’t even know where they got that from. Me and Ye’ just talked the other day and we got real big plans for the record.”“[Kanye’s] not trying to take anything,” he added. “Like I said I just hate there’s so many different parties involved with what we’re planning I can’t really speak on anything and the statement that was made was totally false. To put Ye’ in that light was not cool and he’s been nothing but helpful in the making of the record and the insight on the album as a whole.” Another rapper that Clipse recruited for the disc is the recently resurfaced Dipset leader Cam’Ron. The collaboration is a match made in heaven for fans of both artists’ penchant for coke raps. “Oh my god, I think the Cam’Ron record is going to be an amazing, amazing record,” he said. “I mean I think people are really gonna enjoy that one.”Pusha says the track was tailor made for the Harlem Don by longtime Clipse producers The Neptunes. “We found the record, we called him and told him we wanted him to be on the record and then we actually went to Miami and found the record in Miami with Pharrell. He made it and he was like this is the one for Cam.” Clipse’s third studio album Til The Casket Drops is set for a summer release.