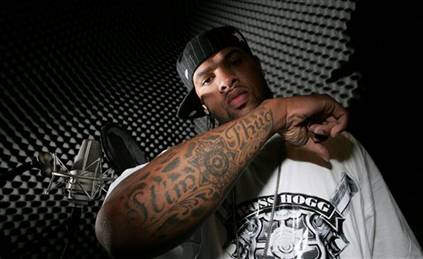 Houston, Texas’ own, Slim Thug steps in for the latest exclusive Industry Interview for THE3XGP.COM! Slim Thug talked to Rick From Chicago about his long awaited sophomore album, why he left Geffen Records, the best places to grab grub in his hometown, what his next single will be, Lupe Fiasco and much more!

RFC: I’ve heard the new album will be a return to your signature Houston sound that you are so very well known for.  Were you able to secure Pharrell for a record on Boss of All Bosses or is this album going in another direction?
Slim Thug: It’s another direction.  I definitely wanted to work with Pharrell and he wanted to work with me on this.  But he be out of the country so much, we could never get on the same page and get that one record.  We traded a few beats but we couldn’t get that one hit record.  And then when I met him at the Grammy’s, he had one for me and he was like, let’s do it but it was kinda too late.  By then we had to turn in the record to the label.   I will definitely get him on the next album, ‘cause the minute I see him, we gonna do some records together.

RFC: What have you done differently with Boss of All Bosses that you didn’t do on Already Platinum?  Because I read an XXL interview last year where you said from a sales point of view, “it’s gonna be the music that’s going to be blamed if [the album] doesn’t do what it’s supposed to do.”
Slim Thug: Yeah.  Because on this album here, I just really did me man and brought it back to my roots .  It ended up being a record where I’m trying to put my city on, be a strong part of the Houston movement and bring back that movement in a strong way.  So I wanted to paint the perfect visual of my city but not just from Swishahouse.   And when I say Swishahouse I mean me, Mike (Jones), Paul Wall and Chamillionaire.  I wanted to work with cats like the S.U.C. (Screwed Up Click) and I wanted to work with legends in the game like UGK, Scarface you know what I’m saying?  You know just anybody who was a big part of the Houston movement, I wanted to get on my record and at the same time I got cats you probably never heard of.  There’s new artists and I love them and I just wanted to paint the perfect picture of Houston as whole. Not just one part of it. Thanks To Rick From Chicago.