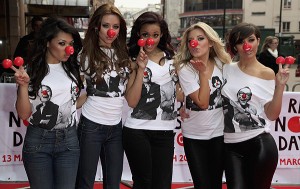 The Saturdays have revealed that they “desperately” want to collaborate with Pharrell Williams. The girlband admitted that they are hopeful the NERD singer will work with them when they travel to the US later in the year. “We hope to finish our second album over there and Pharrell is the only person we desperately want to work with,” Vanessa White told the Daily Star. “His production is insane and would help us in America.” The group added that they hope their success in Britain will help them break the American market. “America is somewhere we’re definitely aiming at. Our songs have already been played on shows like Ugly Betty and Perez Hilton is a big fan and always bigging us up,” Rochelle Wiseman said. “We’ve already had such good feedback. No-one has put us down.” The Saturdays kick off their first headlining tour in Oxford on June 5.