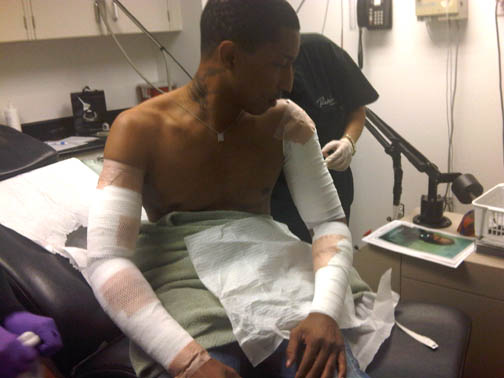 I think we all remember that saying; “a tattoo is for life, not just for Christmas”… no wait, that’s puppies. Well anyway, it seems NERD frontman Pharrell Williams has grown tired of his ink, deciding to go under the laser to have them permanently removed. Recently here for the Future Music Festival, Pharrell sent ladies nationwide into a spin, and we’re pretty sure more than a few of them were quite partial to his tatts, so it’s a surprising move. It’s been a long time coming, however, with Pharrell having said all the way back in early 2008 he was interested in getting them removed. “It’s going to be pricey, but fuck it, it’s worth it,” he said at the time.

“There’s an institute called the Wake Forest Institute in North Carolina for Regenerative Skin Treatment. It’s basically like getting a skin graft, but you’re not taking skin from your ass or your legs. These guys actually grow the skin for you.” In the end Pharrell opted for the more traditional – and, apparently, rather excruciating – method of laser removal. “Laser treatment bitches! Extra crispy. See, no skin graft here, just pure laser pain,” Pharrell joked. “This is our own version of Mythbusters! Laser is the new primer.”