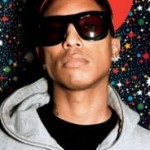 Fast Company issued a list of 100 Most Creative People In Business and Pharrell made it on #36. “Pharrell Williams knows it all starts with a beat — he got his start on the snare drum in his high-school marching band back in Virginia Beach, Virginia. As half of the production duo known as The Neptunes, he has helped everyone from Britney Spears to Justin Timberlake to Madonna to The Hives find time on the charts. Williams also fronts the funk-rock band NERD, produces a clothing line called Billionaire Boys Club, hawks a line of shoes under the Ice Cream Footwear brand, and designed sunglasses and jewelry for Louis Vuitton. Most recently, Limelight, an updated version of Fame that he created with film director McG, was picked up by ABC. Tapping Williams’s own beat, the show is loosely based on his performing-arts experience in high school.