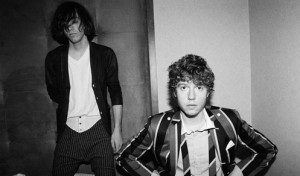 A Band That Knows Where the Money Comes From

Chester French isn’t your typical rock band. Singer D.A. Wallach and multi-instrumentalist Max Drummey met as freshmen at Harvard, where lanky, longhaired Drummey majored in social anthropology and twee, preppy Wallach graduated as the top student in the school’s African-American Studies program. In the video for their best-known song, “She Loves Everybody,” a pretty girl punches the stuffing out of the two helpless weaklings, leaving them bloody-nosed among their broken guitars and drums. Wallach and Drummey, who eschew leather and spandex for bowties and croquet mallets, were signed to Interscope Records just as they graduated two years ago. An album released in April, “Love The Future”, has made the duo upcoming stars, albeit not superstars. But besides the fans drawn to their music, Chester French have amassed a following by spending hours a day networking online. Should you encounter the band on Facebook, MySpace, YouTube, Digg, Twitter or any of the other social sites where they’ve set up shop, you’ll be encouraged to sign up at chesterfrench.com as a V.I.P. for the band’s concierge service. What you might not realize is you’re adding yourself to a database at Salesforce.com.

Wallach told me in a phone call from the band’s current tour that he and Drummey aren’t kidding that they see their fans, not themselves, as the V.I.P.’s. “Traditional record labels looked at music listeners as fans who were supposed to get in line to get an autograph,” he said. That worked, in Wallach’s view, when radio and TV were dominated by a few supersize broadcasters. “When the Beatles played ‘The Ed Sullivan Show,’ seven million people saw it,” he said. “But today, there’s no channel available that will deliver that size an audience. In this day and age, it’s about having a relationship with the people who listen to us. The relationship with someone who likes our music is much more of a conversation than it would have been, even in the ’90s.” Instead of giving interviews to reporters or dropping by radio stations, Wallach spends most of his time online, going through an average 100 to 200 e-mail messages a day. “We respond to every single e-mail we get,” he said. “I do an hour in the morning and an hour at night.

A lot of them are just, ‘I wish you’d come to my city,’ and we’ll write back, ‘Us, too.’ We try to keep it personal and intimate. So it’s not just ‘Dear Friend.’ It’ll be, ‘Dear Paul, thank you for coming to see us in Baton Rouge. We’d really like your ideas for how we can spread our music around in Baton Rouge.’” The band doesn’t think twice about its embrace of upside-down Internet economics. They eagerly share their music and videos on social sites, in hopes of growing a much larger fan base that will eventually spend money on them. “We gave away an album for free,” Wallach said, “and that was the single largest driver of new fans that we’ve done.” They honestly believe giving away copies of their CDs gets them heard by others who’ll go out and buy a copy. But in rock, talk is cheap. So I went and signed up as a Chester French fan coming in from MySpace to see what would happen.

A few hours later, I got an e-mail message from Wallach: “I’m delighted to personally welcome you to our V.I.P. Concierge Service. As a 48-year-old male in San Francisco with an average of 274 friends on social networks” — Salesforce is able to glean these stats from my e-mail address — “you’re an ideal ambassador for our music. Let me know your best mailing address so I can send you some copies of our record for you and your friends!” Three days later, I was eagerly handing out a few of Interscope’s promotional copies of “Love The Future” to friends, who were tickled to get the specially labeled discs. I’m not sure if Chester French will make any money from my handouts, but pushing the band on my coworkers was something rock ‘n roll is supposed to be: Fun.