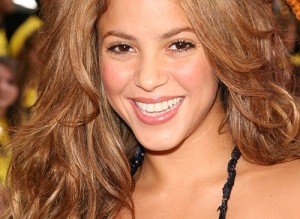 According to the  Rolling Stone article, Shakira has Two more Neptunes Tracks on her album. “It’s very electronic and dance-oriented, club-oriented,” she says of the disc. “It’s designed for people to have fun and enjoy themselves and forget about their troubles and the crisis.” She says she always wanted to do a bass-heavy record without losing “the fusion, which is something I’m always very interested in — bringing in elements from different cultures. So you’re going to find Indian, Africa, Colombian, Middle Eastern influences, but always with the synthesizers as a dominant element.” Those Middle Eastern influences are evident on “Good Stuff” and “Why Wait For Later,” Two Pharrell tracks that are heavy on percussion and unusual synth tones. “Good Stuff” recalls the producer’s work with Britney Spears on “Slave 4 U,” with its unusual syncopation and revelatory, open chorus, while “Why Wait For Later” is a dancey banger with synths that range from string sounds to blazing bag pipes.

“The worst that can happen to me is repeat myself and repeat the same old formula,” Shakira tells RS, adding that she takes a long time between records “because I really want to be sure every detail makes me happy.” She was very pleased to work once again with Wyclef Jean, who she calls a really good friend. She attributes some of their creative synergy to the fact that “We both come from the developing world and we have been close to extreme poverty.” Pharrell forced her to step outside her box and learn to work more quickly, while Hill introduced her to electro acts like Crystal Castles: “They’re a good example of how electronica can take you to different places.”