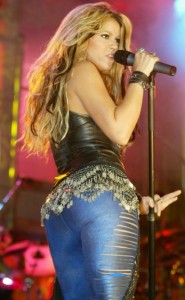 The hip-shaking, belly-undulating mistress of sultry Latin music spent more than a year toiling on She Wolf — her follow-up to 2005’s Oral Fixation Vol. 2 — and she’s hoping the club-ready album will provide fans a bit of an escape in these uncertain times. “It’s a very electronic album,” the singer told MTV News. “Dance-oriented. Club-oriented. I want people to have fun with it. Forget about the troubles. Forget about the crisis. Forget everything for a minute — at least while they listen to the music.” “You never know the final destination of a creative project,” she said. “At first, you are standing in front of a white canvas, and that’s the scariest thing on earth. You don’t know if you’re gonna do justice to the gifts that you have been given.

Or if you are gonna be able to present the public something decent. You just have a huge question mark in front of you, and it’s just frightening. But from the beginning of the project, I knew that I wanted an album that had a lot more to do with electronica. That would have a more bigger bottom end.” “I wanted a bassier album with harder sounds,” she explained with a laugh. “I wanted the beats to be very solid. I wanted to build a solid foundation starting from the beats.” That’s where her producers stepped in. Comparing the collaborative studio process to parents raising a child, the 32-year-old Shakira said of Pharrell, “He comes up with ideas, and he executes them immediately. It’s really cool, because I’m a little bit slower, and he’s the man with the big strokes, and he really comes with great ideas. It was a great synergy.”