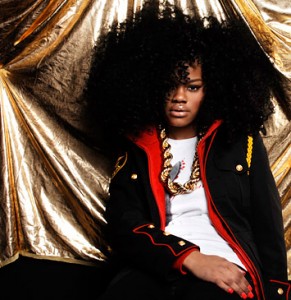 Teyana Taylor broke down and cried after reading positive comments written about her in the blogosphere. The 18-year-old Harlem native became increasingly emotional while scrolling through various posts from her fans. “I’m not sad ya’ll,” she said wiping the tears from her face. “It’s tears of joy.” While reading remarks ranging from “I love you Teyana,” to “You are such an inspiration,” Taylor got so emotional that she could barely speak. “The reason why this is so special to me is because I go on blogs and I read the comments and the mean things that people [write] about me every single day. This might seem little to everybody else but this is really big to me. I never seen comments like this before. I’ve never really seen a whole bunch of people come together and support me.”