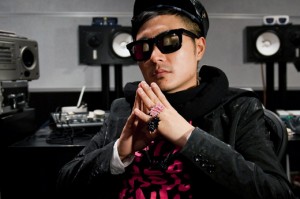 Klue.com: Do you think your friends Nigo and Pharrell have sold out to big brands like Louis Vuitton?
Verbal: Street doesn’t have to connotate a low price range. When I first saw Pharrell, he was wearing a trucker hat when it wasn’t even in. He had on a Billabong T-shirt. I don’t think a lot of hip-hop artists at that time really wore Billabong. Maybe it’s cool in Virginia, where he’s from, but it transcends cultural borders. Nigo just started out pressing T-shirts at home. I don’t think he thought it’d blow up. About the Louis Vuitton thing, I think they’re just trying to take it to the next level because these big brands are interested in what they’ve been neglecting for many years. Pharrell, Nigo and Kanye are trying to go there and change high fashion. I wouldn’t say it’s selling out. They’re trying to change it from the bottom up.